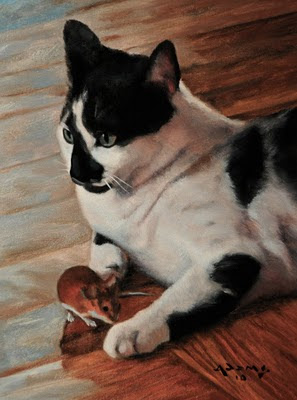 A normal nightly ritual at the Adams' household before lights out is usually a game of "stick" with our four resident felines. Stick is played by sweeping and wiggling a felt mouse with 5 leather tails attached to a stick enticingly back and forth for their (and my) amusement. Shirley and Ella insist on it, Sammy pretends not to care and hides under the bed until a hidden paw lurches out to get in the game. JJ would like to play but is over-matched by his younger cohorts and usually sits on the sidelines and watches. Two nights ago no one showed up for the game and curious, we went to find out why. What could be more important than "stick?" Well, I'll tell you. How about a real live mouse? All the players, even JJ, had cornered a mouse in the studio and were standing guard. He had taken refuge under the bookcase and they had no intention of letting him saunter off. Normally our bed looks like NFL tonight with a pile of cats and us vying for a comfortable spot. Once settled in, trying to extricate oneself in the middle of the night can be a challenge. Even more so is working yourself back in once they have spread out. Even with a king-sized bed, they take up a lot of real estate. Sometime late that night Sam and JJ crept back to bed, leaving Ella to continue the vigil. By lunchtime all but Shirley were back at it. By this time the poor mouse had become resigned to his fate and would scoot across the studio floor pursued by his tormentors who, too, were exhausted from their all night antics. At one point I think the little guy figured out that if he didn't run, they wouldn't chase him and he actually almost curled up with Ella, who was so tired she could barely keep her eyes open. I grabbed my camera and snapped off a few shots of this tender scene, got a box to put over the mouse who was no worse for the wear and let him outside - much to the kids chagrin and all was back to normal the next night. This scene with Ella and her new friend reminded me of the saddest Christmas carol I have ever heard, which always makes me well-up when I hear it. It's called "The Cat Carol" by Bruce Evans.

The cat wanted in to the warm warm house,
but no one would let the cat in
It was cold outside on Christmas Eve,
She meowed and meowed by the door.

The cat was not let in the warm warm house,
And her tiny cries were ignored.
'twas a blizzard now, the worst of the year,
There was no place for her to hide.

Just then a poor little mouse crept by,
He had lost his way in the snow.
He was on his last legs and was almost froze,
The cat lifted him with her paw.

She said "Poor mouse do not be afraid,
because this is Christmas Eve.
"On this freezing night we both need a friend,
"I won’t hurt you - stay by my side."

She dug a small hole in an icy drift,
This is where they would spent the night.
She curled herself 'round her helpless friend,
Protecting him from the cold.

When Santa came by near the end of the night,
the reindeer started to cry.
They found the cat lying there in the snow,
and they could see that she had died.

They lifted her up from the frozen ground,
and placed her into the sleigh.
It was then they saw the little mouse wrapped up,
she had kept him warm in her fur.

"Oh thank you Santa for finding us!
"Dear cat wake up we are saved!"
..."I’m sorry mouse but your friend has died,
there’s nothing more we can do.

"On Christmas Eve she gave you her life,
the greatest gift of them all."
Santa lifted her up into the night sky,
and laid her to rest among the stars.

"Dear mouse don’t cry you are not alone,
you will see your friend every year.
"Each Christmas a Cat Constellation will shine,
to remind us that her love’s still here." 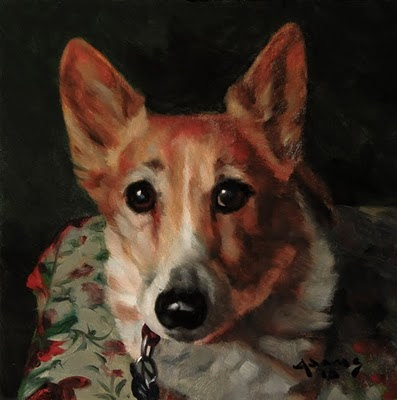 Oil on museum quality ampersand gessobord panel 6" x 6"
I find Facebook an interesting Internet phenomenon. One can lurk in the shadows and yet keep abreast of one's friends' and family's goings on. I personally have no idea or care about what happens in Farmville or what all those hearts and gold stars that all my Facebook "friends" bestow on each other mean. What I do care about is when I read about something extraordinary - whether happy or sad - that happens to one of my friends. "Friend" is a word that is thrown around a bit too casually these days. I have always counted myself blessed to have so many people in my life that I consider true friends. You know - the ones you can call in the middle of the night when you have broken down on some God-forsaken country road 50 miles from home and they will rub the sleep from their eyes, pull on their pants and come get you. It's what friends do. Don't get me wrong, I am pleased and fascinated by my Facebook "friends." It's nice to know that even a few total strangers consider me interesting enough to want me as their "friend." But the real point of this is that I recently saw a post about the passing of my friend's friend's dog. I only met the dog's owner once or twice at a party, but I was so moved by the photos of his beloved Muzzy and the touching comments from those who knew her, that I wanted to paint her portrait to honor her memory. She has a regal look about her, perhaps owing to the Elizabethan collar of white fur around her nape. The floral ottoman allowed for some fun brushwork and gave the painting some quiet femininity.
Posted by Mark Adams at 12:06 AM 14 comments: 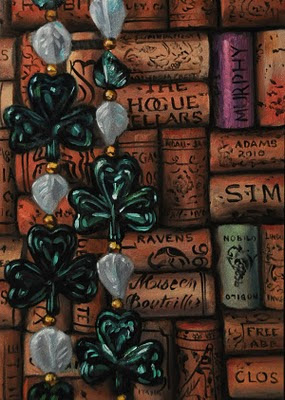 This is my submission to the 2nd challenge of the Calypso Moon Artist Movement. The challenge was to "take only two things that you collect and make an interesting painting that reflects your personality and/or history." This was not an easy task, as I collect lots of things. To the uninitiated I might even be considered a hoarder, which is neither true nor fair. Being an artist, I see the potential in things as possible grist for the creative mill. Corks, wine foils, beer caps, wishbones, cigar bands, hats, fortune cookie fortunes and Mardi Gras beads are but a small sampling of what is in the hundreds of boxes in the basement. I have been saving wishbones since I was 11 and have thousands. I have bushel baskets of wine corks which make great bulletin boards. With the advent of the Stelvin closure, a.k.a. the screw cap, corks are fast becoming a thing of the past (insert Boones Farm Strawberry Hill reference/joke here). I know screw caps are better at preserving wine but the theatrics and pageantry of the sommelier is diminished by a mere quick twist of the wrist. I wonder - if a bad bottle of wine is "corked" is a bad Stelvin capped bottle "screwed"?

The bead collection started years ago when I was down in New Orleans (duh!) for Mardi Gras. My wife and I were walking back to our hotel after the Orpheus Ball, dressed in black tie and gown and we happened on the tail end of a Mardi Gras parade. We later found out that you must get rid of all your throws before the end of the parade, so timing is everything. You want to have enough to last the whole parade but since they reuse the floats, you have to jettison everything in the last two blocks, which is where we were. The revelers were lobbing beads by the gross, still wrapped in their plastic bags. Armfuls of beads came raining down on us. I could barely carry my treasure back to the room. Needless to say I was hooked!

Alice wanted us to demonstrate our creative process, so here are some work in progress pics: 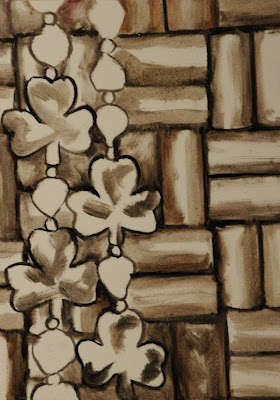 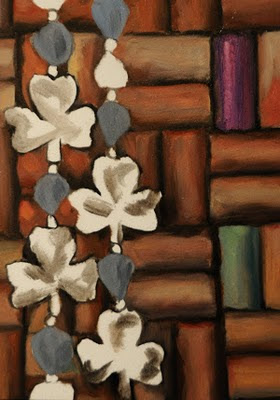 Here is a rare photo of one the larger cork boards I have made. Rare because it is not completely covered with stuff push pinned to it as it will be is a few months time, since we just moved in and I took the old detritus off during the move. Empty vertical surfaces are almost as much a clutter magnet to an artist (at least to this artist) as a horizontal one. Note the wishbone drying in the upper left corner. 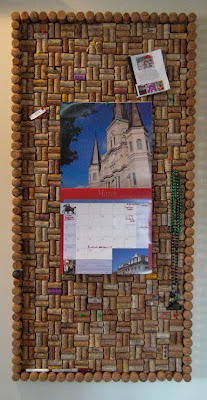 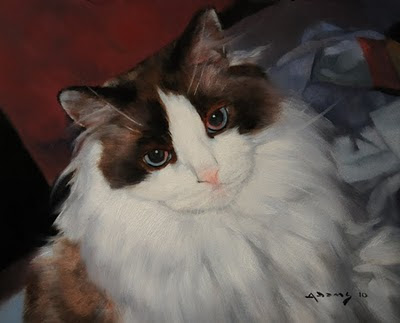 Before I got swept up in the great move and before the back to back blizzards of 2010 I was loosely commissioned to paint this magnificent Ragdoll. After yesterday (sorry Tig) I thought it might be time to splash around in this feline's fantastic white mane. Besides I have a soft spot for any cat named JJ.
Posted by Mark Adams at 11:52 PM 10 comments: 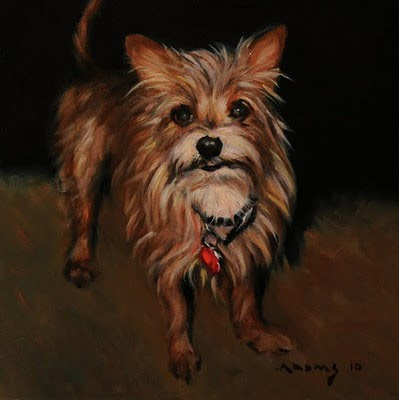 Why is it that every time I lay off the brush for a while, I start back up painting a wild creature like Tig here? You may remember back on June 15th 2008 I had a similar experience painting another of my friend Deb's canines, a wee wiry terrier named Elfie. Tig was Elfie's predecessor. I got a little back story from Deb:

"She was a rescue who went through at least 2 owners before she came to me. We didn't know her exact age of course, but we think that she lived to be about 18. She peed by walking on her front two paws with her hind legs in the air - the only trick that any of my dogs have ever been able to do and one that made me laugh every time she did it. (Of course I'm easy to amuse.) I really miss her."

Thanks for giving me a needed jump start Tig - much obliged.
Posted by Mark Adams at 7:07 PM 1 comment: