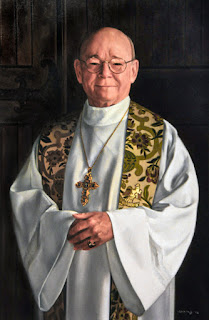 This month's challenge was "Adulthood" carrying forward the theme of last month's "Adolescence".  It may come as no surprise to anyone that the final challenge this year will be "Old Age."  Rather apropos, as I am turning 60 next month. Though I am tempted to paint a self-portrait, I fear my septuagenarian and octogenarian friends might scoff at the idea.  I almost copped out again this month and thought to use a snippet of a self-portrait I did back in 1990 called "Marks on Canvas."   There, within the trompe-l'œil collage-like painting, is an image of me holding my infant daughter Holly.  Probably the first time in my life that I considered myself an adult, with all the responsibilities that go along with parentage. I had finally made it. 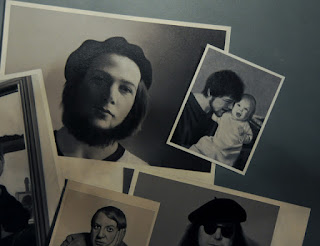 Alas, it was not to be.  My profession and indeed my very nature prevented me from fully realizing adulthood.  I'm not implying that I suffer from a Peter Pan complex, however my first wife's name was Wendy.  Just sayin'.

My next idea of what to paint for this challenge was to revisit a painting I did of my daughter and her youngest child.  Why is it that having a child seems to be the absolute personification of adulthood I wonder?  Can it be the childless remain forever young?  You may remember this painting from 2009. 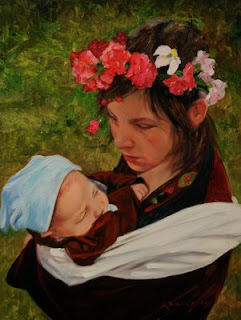 Instead I looked to my dear friend and recently departed Father Fred Hanna.  I have been working on this painting for over a decade.  I was loath to finish it as I have a very odd superstition that has haunted me for years. From the time I first started painting, I found that if I painted someone that I loved, they soon vanished - poof - gone.  They didn't necessarily die, but they were gone from my life.  This happened time after time.  I purposely left the chain holding Fred's cross unpainted until he finally was called home last year at 86.  What a sweet man he was.  He married my wife and me, as well as my daughter, a myriad of other friends and relatives and buried a few as well.  He was the father to us all.  You can click Fred's obituary from the Baltimore Sun to see what a great man he was.  What the article fails to mention is during his tenure as associate rector at Emmanuel Episcopal Church in Mount Vernon, he allowed the aspiring directer John Waters to show clandestine screenings of his notorious "Pink Flamingos" in the under-croft when a venue could not be found.  Indeed, John calls Fred his first distributor.

My fellow artist's work this month: 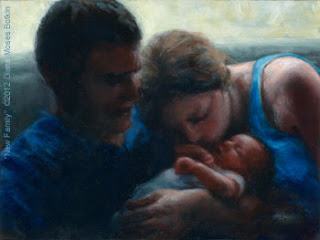 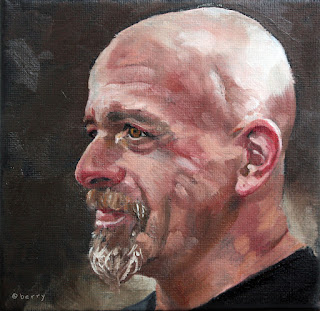