The Pirate of Reisterstown - "At year's end" 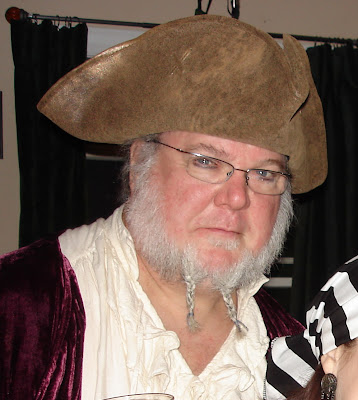 Christmas is over, my birthday, too, and New Year's Eve is here. Most of my traveling is done, although a short trip to Florida and a long one to Paris is looming, I am really looking forward to getting back in the Studio. Have a Happy New Year!!
Posted by Mark Adams at 6:48 PM No comments: 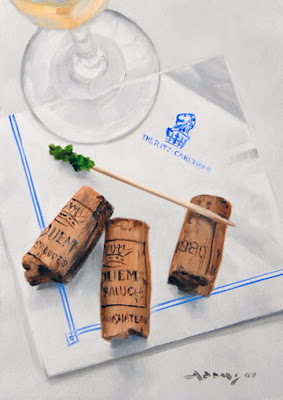 This is one of the paintings that I couldn't post until after Christmas. My friends celebrated their 25th wedding anniversary two years ago with a spectacular party at what was then the Boston Ritz Carlton. To commerate the occasion, they opened a case of 25-year old Château d'Yquem sauterne -- quite a treat for those of us lucky enough to be invited. I managed to squirrel away mementos from the party in the pocket of my tuxedo. They came in handy when the wife asked me to paint something as a Christmas gift for her husband this year.
Posted by Mark Adams at 4:52 PM No comments: 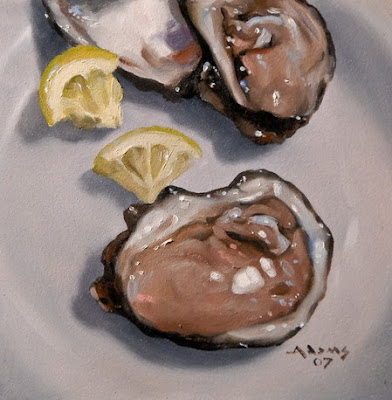 This is the painting that was in the juried show, "Small Wonders," at the Maryland Federation of Arts Circle Gallery in Annapolis, Maryland. I like this painting and am glad to have it back in the studio. There is a song called "Do you know what it means to miss New Orleans?" I do, and this painting reminds me why. 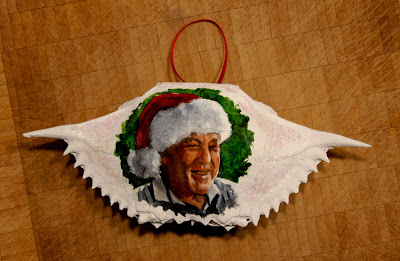 Here is a little painting that I couldn't post before. I must admit that painting a portrait on a gesso-primed crab shell was a new experience for me but hey, I'm from Baltimore, so what could be more appropriate? The glitter was my wife's idea and seemed to add a je ne sais quoi.
Posted by Mark Adams at 10:30 PM No comments: 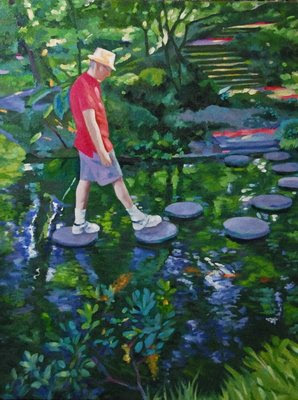 There is a scene in the movie “The Time Machine” where George has fended off the attacking morlocks and jumps into his time machine, knocking the crystal control lever all the way forward. The world around him begins to move at an alarmingly fast pace. He looks on in horror as a dead morlock turns to dust in mere seconds. My life seems to be doing that. If only I could play out the next scene. “But I was going the wrong way,” he says “back, I had to go back,” and he grabs the lever with both hands and reverses his course through time and returns to his home only slightly late for dinner. It always bothered me that he was late at all, seeing as he had a time machine, but no matter. All this is to say that 10 days have gone by without so much as a dead morlock to show for it. Well there are a smattering of secret painted presents yet to be revealed but 4 days in New Orleans and 3 in Boston have taken their toll. I did glean much reference material in the Big Easy, so the days ahead will be filled with fun stuff. Speaking of fun stuff, here is a new piece that I have been picking at since the summer. It is of my friend Gary crossing the koi pond at the Fort Worth Botanic Gardens. I call it “Walking on Water.”
Posted by Mark Adams at 8:32 PM 3 comments: 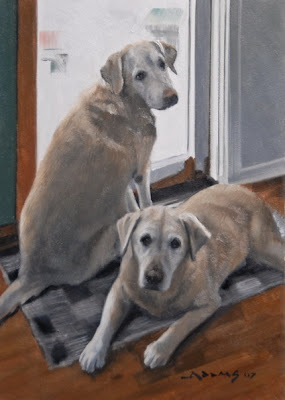 Perhaps you can teach an old dog, new tricks. By that I mean this old dog. The daily painting exercises have given me fresh eyes. This piece was commissioned posthumously to commemorate the life of Peggy, the yellow lab. You can see by her muzzle that she has some years on her. This was yesterdays painting and I was given the green light to post it. ...R.I.P. Peggy.
Posted by Mark Adams at 2:10 PM 1 comment:

"Taking a short break from posting" 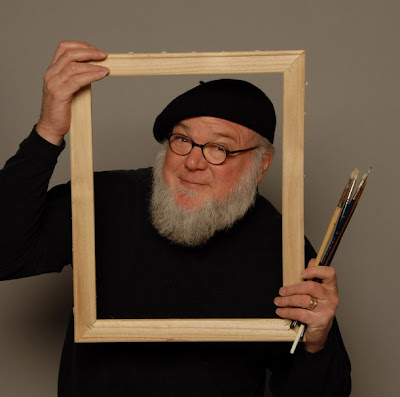 Just when you got used to seeing new work on a daily basis I go and spoil it. Sadly, I must withhold the next two or three paintings as they are secret Christmas gifts. Rest assured that I will post them after the holidays. If that wasn't bad enough, I am off to New Orleans for a bit. Fear not, the muse has settled in to her new digs and the fire is still lit. Stay tuned!

Posted by Mark Adams at 9:57 PM No comments: 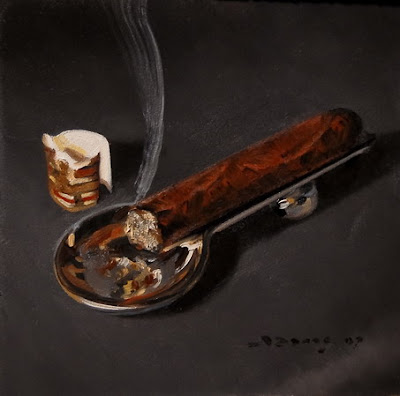 In Oscar Wilde’s play, "The Importance of Being Earnest," Lady Bracknell asks Jack if he smokes. He replies, “Well, yes, I must admit I smoke.” “I am glad to hear it,” she says, “a man should always have an occupation of some kind.” I too, must admit I smoke [cigars] when I paint. Not always as nice a cigar as this Ashton. Painting in the smoke was an act of faith as I pulled the soft brush through the gradient background. I only had one shot and I had never really tried to do what I was attempting. It worked! A simple yet satisfying little painting. 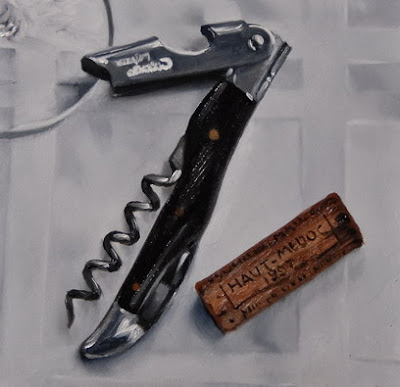 My first wine painting, "Cépage Laguiole Corkscrew" was a commission and thus not available to those who have expressed interest. I have played with those same elements in a more simplified, almost abstract composition. From across the studio it reads like the mark of Zorro! The aged cork against the white table cloth is quite trompe l'oeil.
Posted by Mark Adams at 12:05 PM No comments: 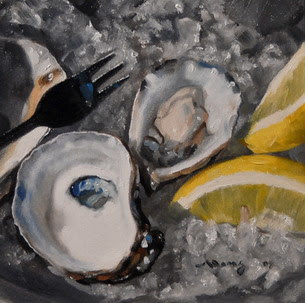 I went to Ryleigh’s Oyster Bar in Baltimore this summer for their First Annual Oyster Festival. There were quite a few varieties of oysters being offered that day and I don’t recall from whence these guys came. We ate al fresco and the sun raked across the pretty mother of pearl shells and danced on the ice. I like the bits of blue. I toyed with the idea of hinting at the “Sunkist” logo on the lemon for a small splash of green but thought the better of it. If you look hard you can see two chrome sauce cups reflected in the ice at the top. 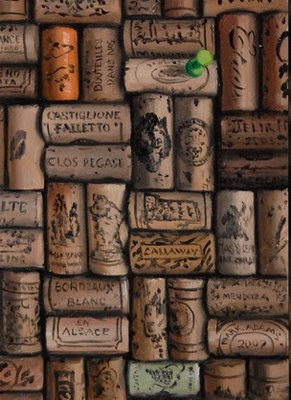 I don’t what is so compelling about wine corks. These little speckled, brown cylinders just delight me. Maybe it’s their infinite variety - the myriad designs and colors. Perhaps it’s their ultimate demise that makes me save them. My minions pay token when coming to parties with bags full of corks (and foils and champagne medallions). As an artist, I like units - things that can make up larger things. I am currently visualizing a mosaic of Julia Child using wine foils as pixels a la Chuck Close. I have made many 2’ x 4’ bulletin boards with corks. Some recipients of these find it hard to use them for the purpose for which they were made because they don’t want to cover them up. This painting answers that problem. It is a small section of my board in the kitchen. 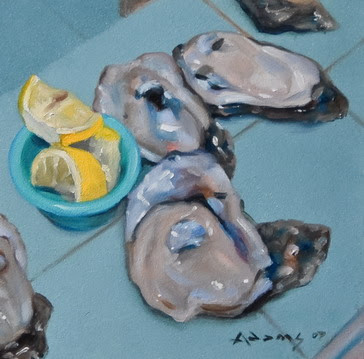 One of my favorite places to eat in New Orleans is an old established oyster bar and family restaurant on Magazine Street called Casamento’s. It was spared the wrath of Katrina, though apparently Joe Casamento, the son the original owner was not - he died the night of the evacuation. The shuckers lay the "ersters" directly on the old fashioned pale green tiles. Some of them were as big as my hand! (None of them "tourist oysters" for me) Enjoy!
Posted by Mark Adams at 5:17 PM 1 comment:

Sometimes life gets in the way.

Being a slave to the daily paintings is not what this is all about so I may take a respite from posting on the weekends. Keep checking in and please post comments -- an artist needs feedback on his creations. Just click on "comments," not the envelope. Thanks!
Posted by Mark Adams at 12:11 PM No comments: