"Piper in the garden" 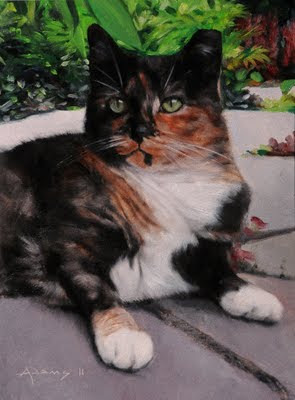 Here it is gang; the first painting since the back went out. I won't bore you with the details - the short form is that I had (have) nerve damage in my right leg which has prevented me from standing for long periods of time. Since I stand at my easel, which I feel is the only way to paint (no offense to the sitting artists reading this) I needed a lot of physical therapy to help regain my strength. A big thanks to Janine at Hunt Valley Physical Therapy for getting me this far.

It is apropos that I chose Piper to be my first subject. She has been my model more than a few times, being the mother of three of my four studio assistants. I haven't painted her since her ear was tipped. Piper could be the poster child for TNR. For those unfamiliar with the program Trap-Neuter-Return (TNR) is a method of humanely trapping unaltered feral cats, spaying or neutering them, and releasing them back to the same location where they were collected. TNR is promoted by the ASPCA as a humane and more effective alternative to euthanasia for managing and reducing feral cat populations. When I was finally able to trap Piper and take her to the Humane Society to be spayed she was once again laden with eight kitten embryos. Tipping the ear is a way to signal to other kind souls who wish to help these wayward girls that they have been fixed. Living a few blocks from the Humane Society, we had our share of strays come to call. There are a lot of despicable people in this world, among the worst are the cowards who deposit their unwanted pets on the Humane Society grounds after hours so they don't have to explain why they are giving them up. One such visitor was a little white cat that we called Clara. When we finally were able to gain her confidence, we took her to the vet to be spayed. Our keen-eyed vet noticed the incision scar from her previous spay when she shaved her and thankfully didn't open her up again. Clara was probably someone's pet that they had gotten tired of and dumped up the road. Piper is and always will be feral. She and her wild companion, Bristol (yes, named after the Palin girls) live a good life on the back porch. We live in the country so cars are not an issue, in case you were worried. The girls have a duplex cat house that I built for them which has two heated sheepskin beds in the winter and two hammocks in the summer to keep them comfortable. They prefer to hang out on top, like Snoopy on his doghouse, in this heat. Three meals a day (canned food) and a midnight snack - they don't go too far afield.

It felt strange (in a good way) to be painting again.
Posted by Mark Adams at 9:09 PM 4 comments: