"Blowing Bubbles in the Forest" 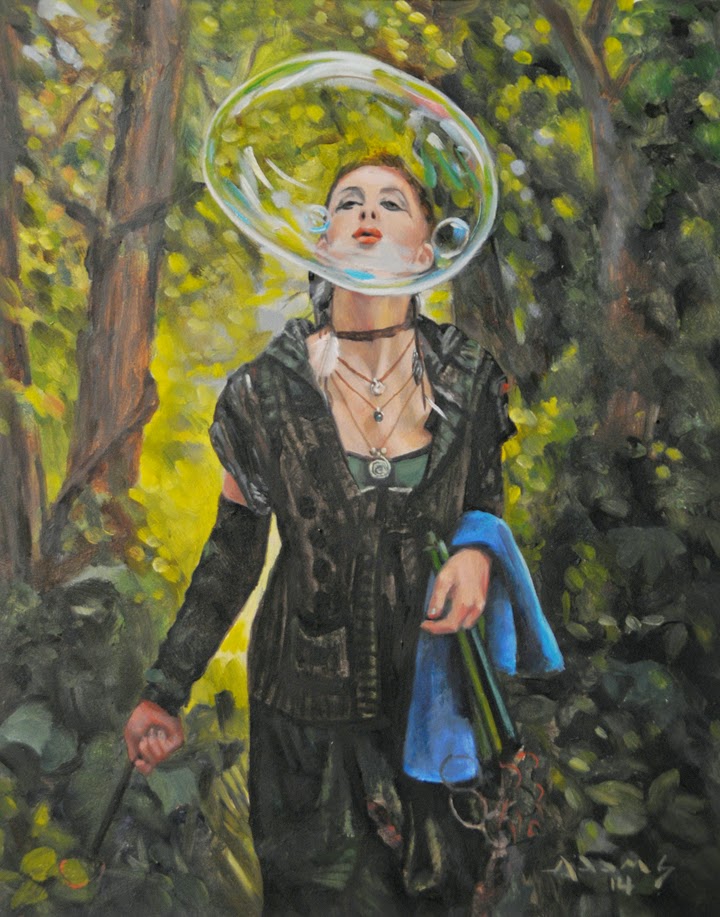 "Another Foggy Afternoon on the Pont Alexander III Bridge" 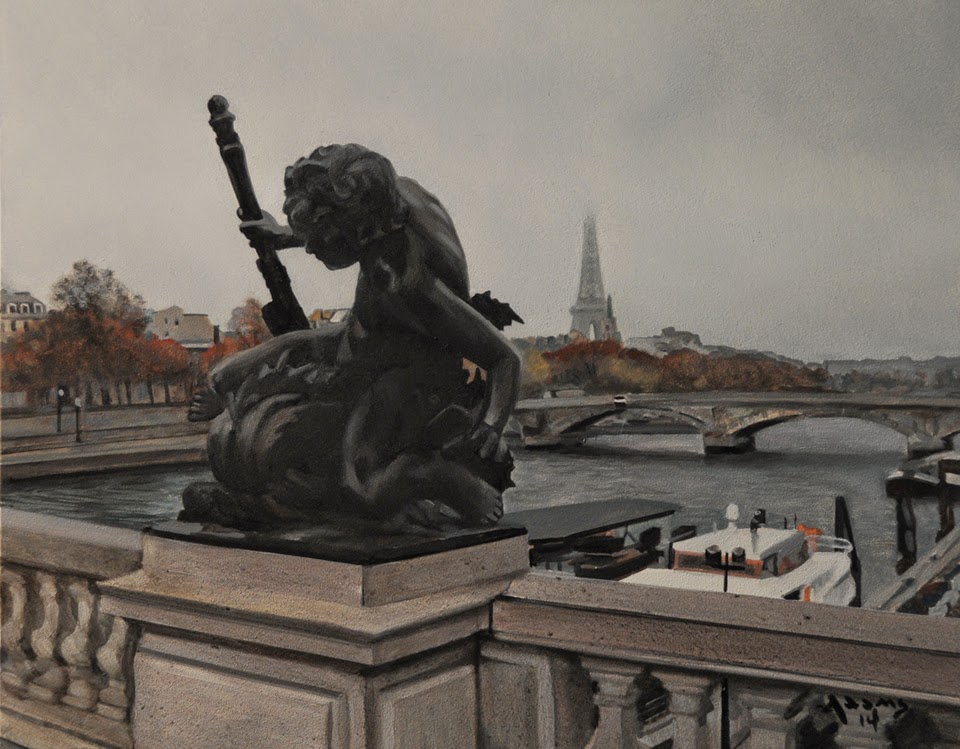 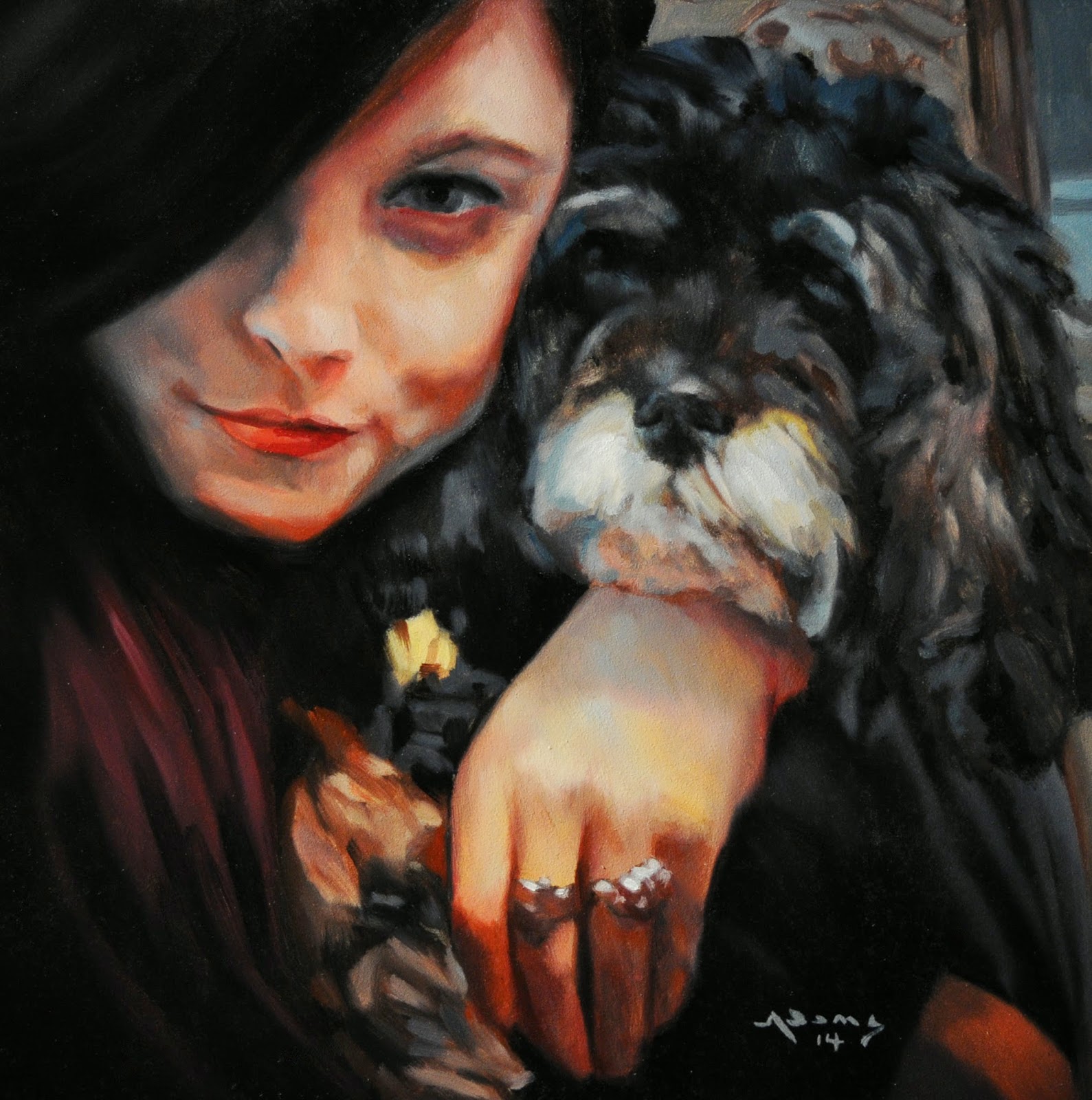 This is an earlier portrait of Moxie with her owner in happier days.  I was once again playing with the Zorn palette but felt the need for a little Prussian blue. Even Anders wasn't slavish to the limited palette at times.
Posted by Mark Adams at 11:19 AM 2 comments: 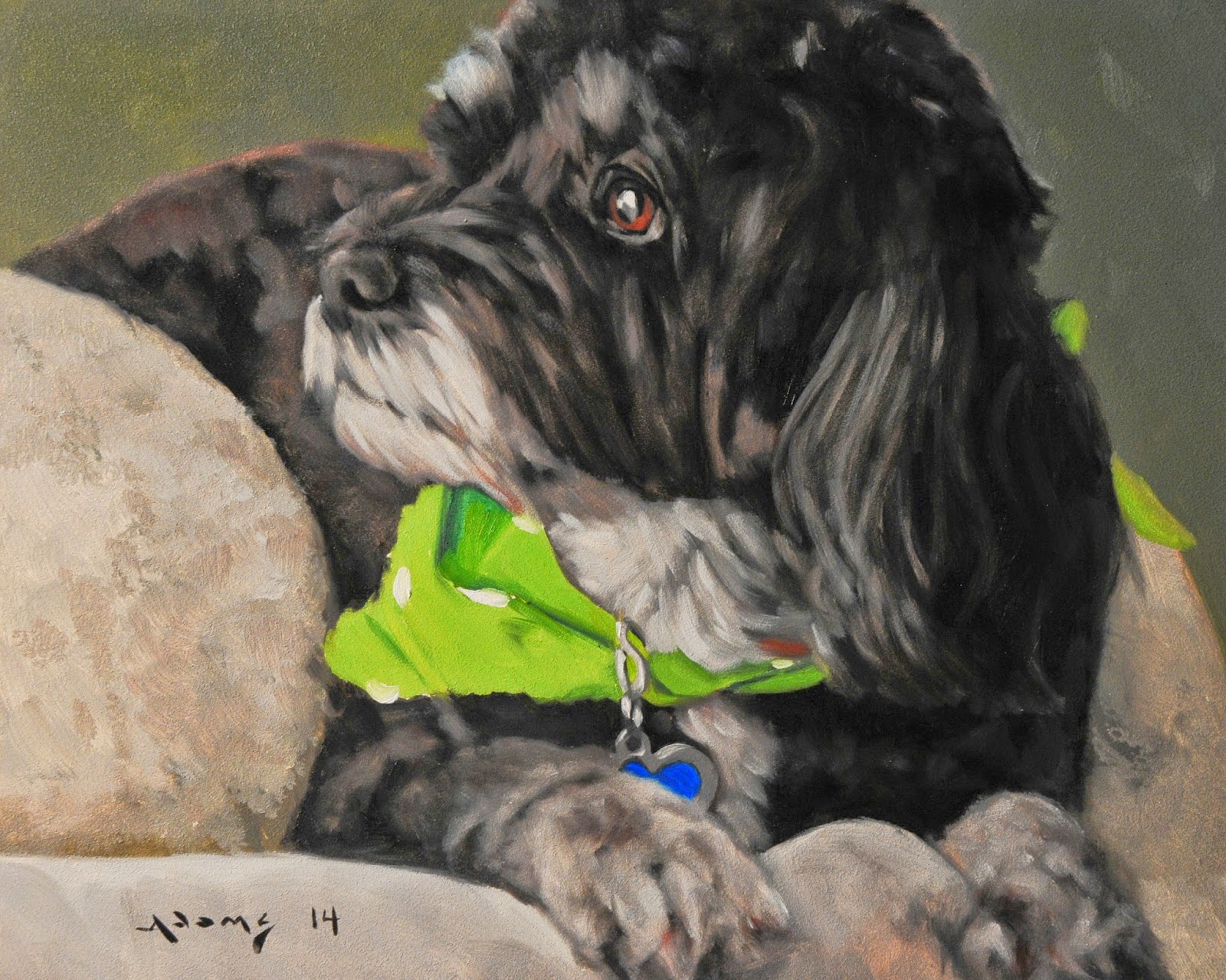 I'm sorry that I have been remiss in my blog duties lately.  I have done a few paintings in the last month or so but my mind has been focused on the declining health of my faithful companion and muse - JJ.  He was diagnosed with an abdominal mass in late March and we have been trying our best to keep him as comfortable as possible.  It is so sad to see him slipping away.  One bright spot - JJ has always wanted to go outside and we have found a way to allow him to stroll the grounds with us in safety using a cat harness.  He doesn't mind the harness and I'm happy to report he has found renewed vigor in the prospect of going for a walk.

Lately it seems my raison d'être is painting posthumous pet portraits.   It is certainly a compassionate and noble cause.   It is satisfying to know that my work can assuage someone's grief and create a lasting memorial.  This is Moxie.  She recently went to join the morning stars.
Posted by Mark Adams at 6:57 PM 2 comments: 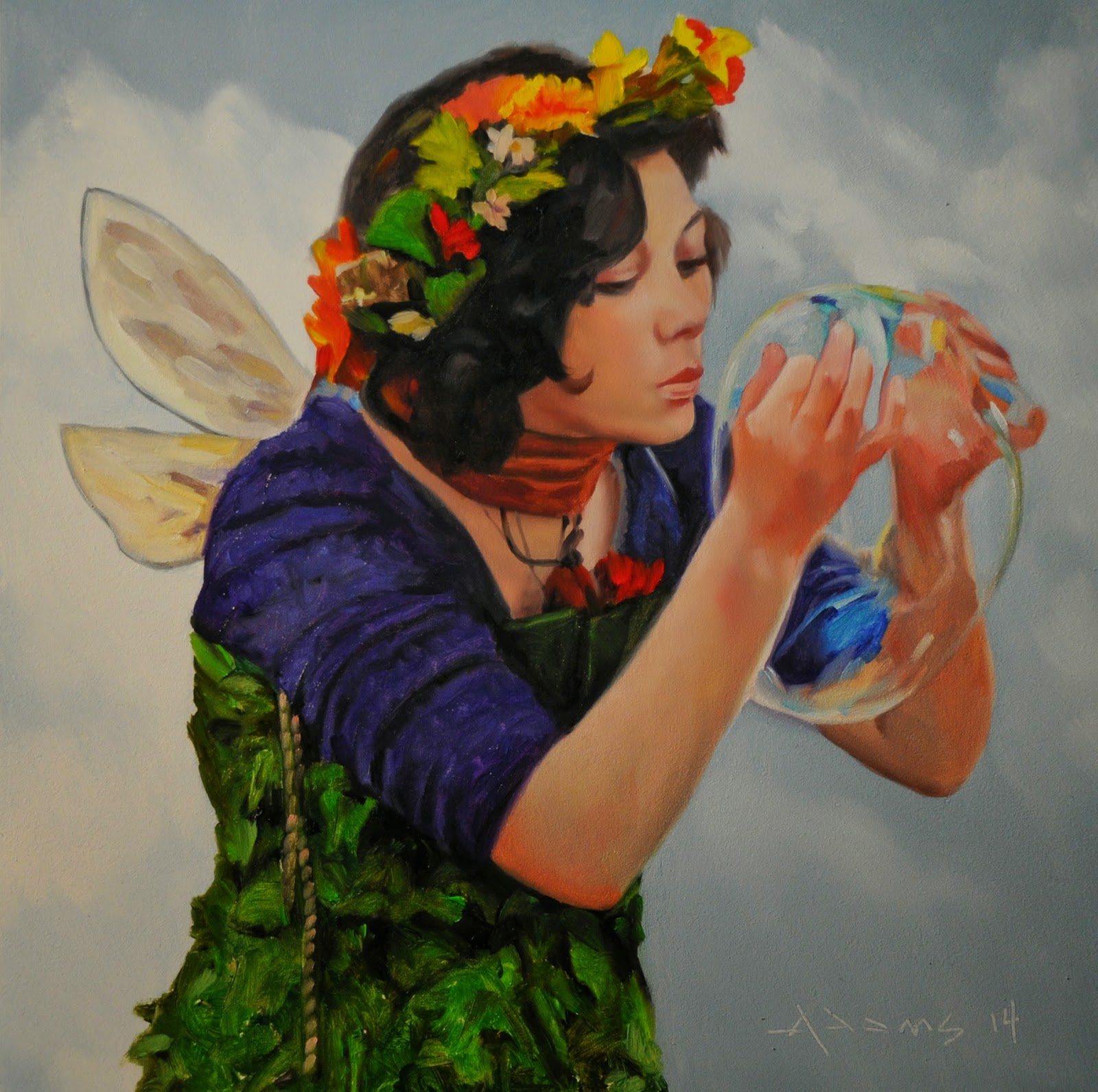 I had fun with this painting of a faerie girl blowing bubbles at the Maryland Renaissance Festival.  As many of you know, I really get into the spirit when I go the the RenFest and always dress in period costume.   Indeed, it will surprise no one that I have more costumes than clothes hanging in my closet.  Sadly, most attendees to our Renaissance Fair are dressed more appropriately for a trip to the local Walmart than a trip back in time to jolly olde England in the 15th century.  It was a pleasure to remove mom in her stretch pants, pushing a stroller and dad in his Orioles tee shirt, etc., from behind this model.  The background certainly gives her a more celestial countenance.
Posted by Mark Adams at 5:14 PM 1 comment:

'"Things are looking up" 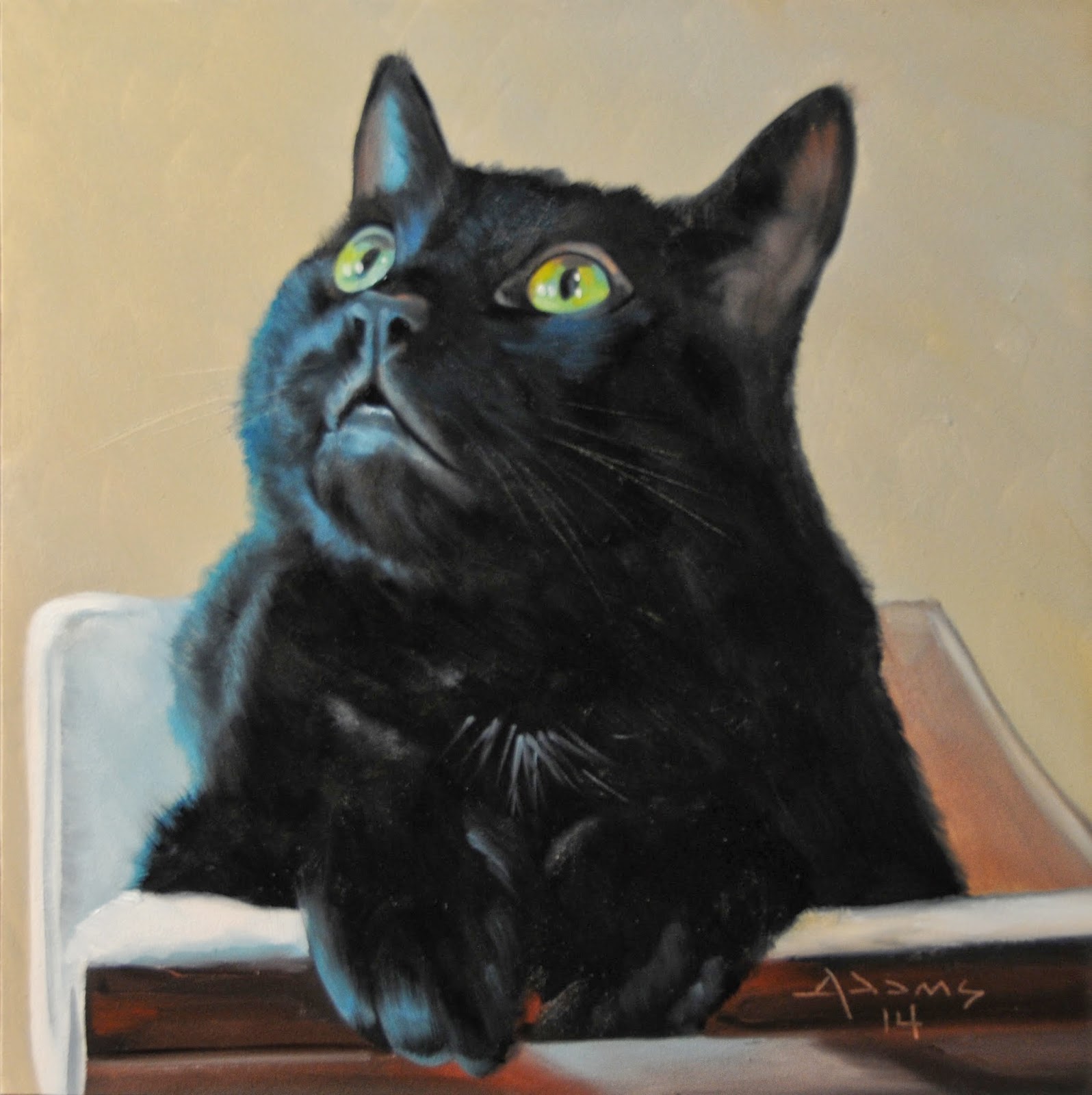 My little studio companion in happier days.  I lost my Sammy last May.  A day doesn't go by that I don't think of him...or Vincent, or Theo, or China, or Titian, or Frankie...
Posted by Mark Adams at 10:59 PM 1 comment: 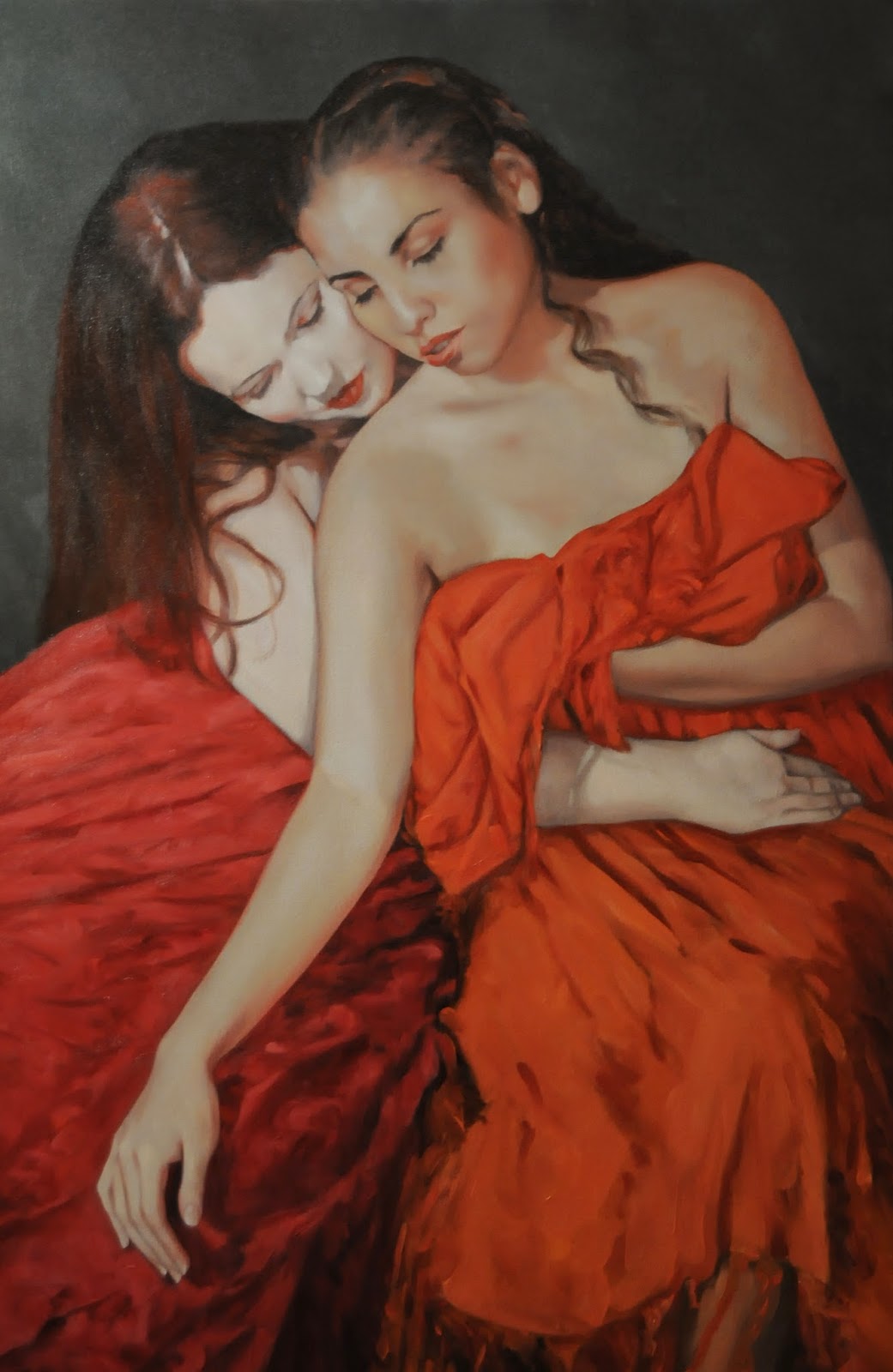 Those who have been frequent visitors to my blog may think that all I paint are small studies of animals and oysters.  Visitors to the studio get a different picture of the artist.  My work is actually quite varied in size and scope.  For example; all of the "Confetti Series", canvases portraying contemporary American fashion from the late 80's, were a massive 40" x 60".  Hung together at the Zenith Gallery in Washington, DC, they made quite a powerful statement.  The little panels have been an important bridge between series and a way for more people to have access to my work.  Of course selling tiny studies has not been without consequences.  The price of a complicated portrait is many many times more than an oil sketch that took a few hours.  I am having a hard time juggling the two.  I'd hate to give up the small work since the immediate pleasure of posting something new is more exciting than commission work where only you and the client see the finished painting.  Well...and all my Facebook friends usually get a peek.
Posted by Mark Adams at 10:07 AM 2 comments: 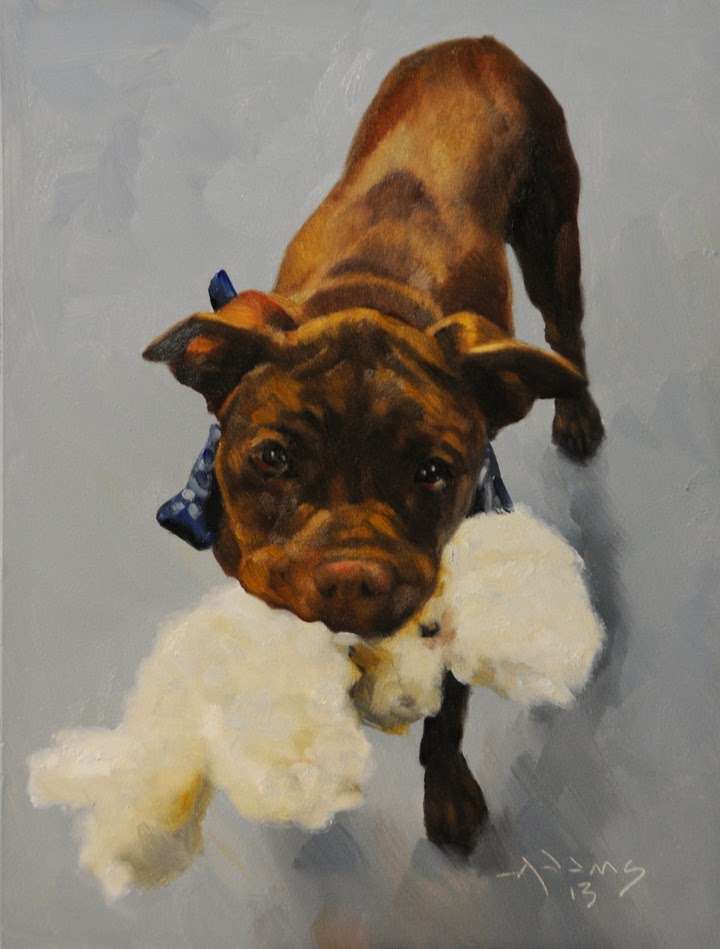 Painted last year as part of the rescue series, this little pit bull puppy is looking for someone to play fetch.  The blue bandana adds a bit of needed color.
Posted by Mark Adams at 10:32 AM 2 comments: 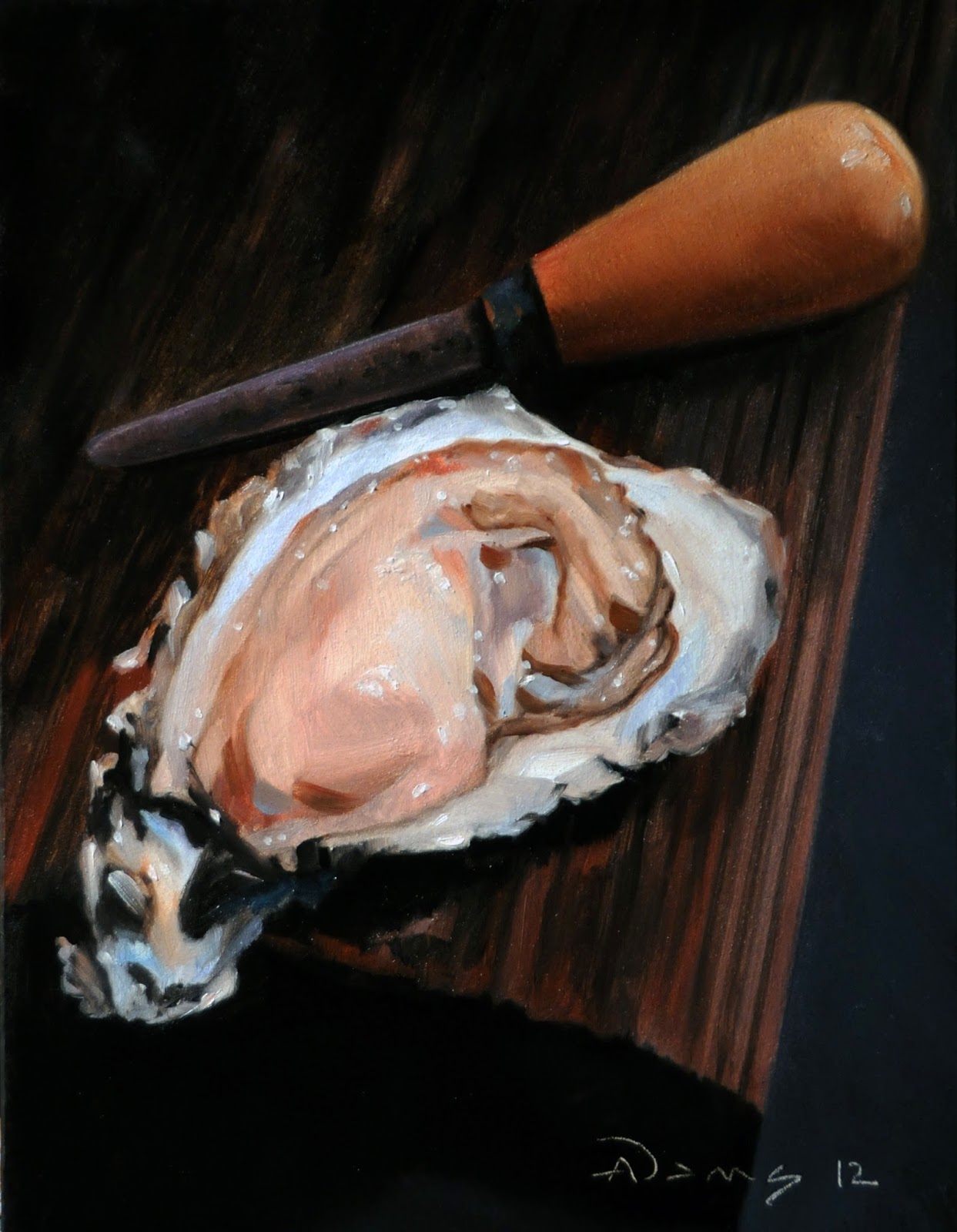 
If some of these paintings look familiar it is because and I phasing out the "small paintings" blog and repopulating the work here.  That said, I have always liked this oyster painting and it has happily lived in the studio for two years but it is time to give it some air so I  am putting it and some other old friends up in my daily paintworks gallery. 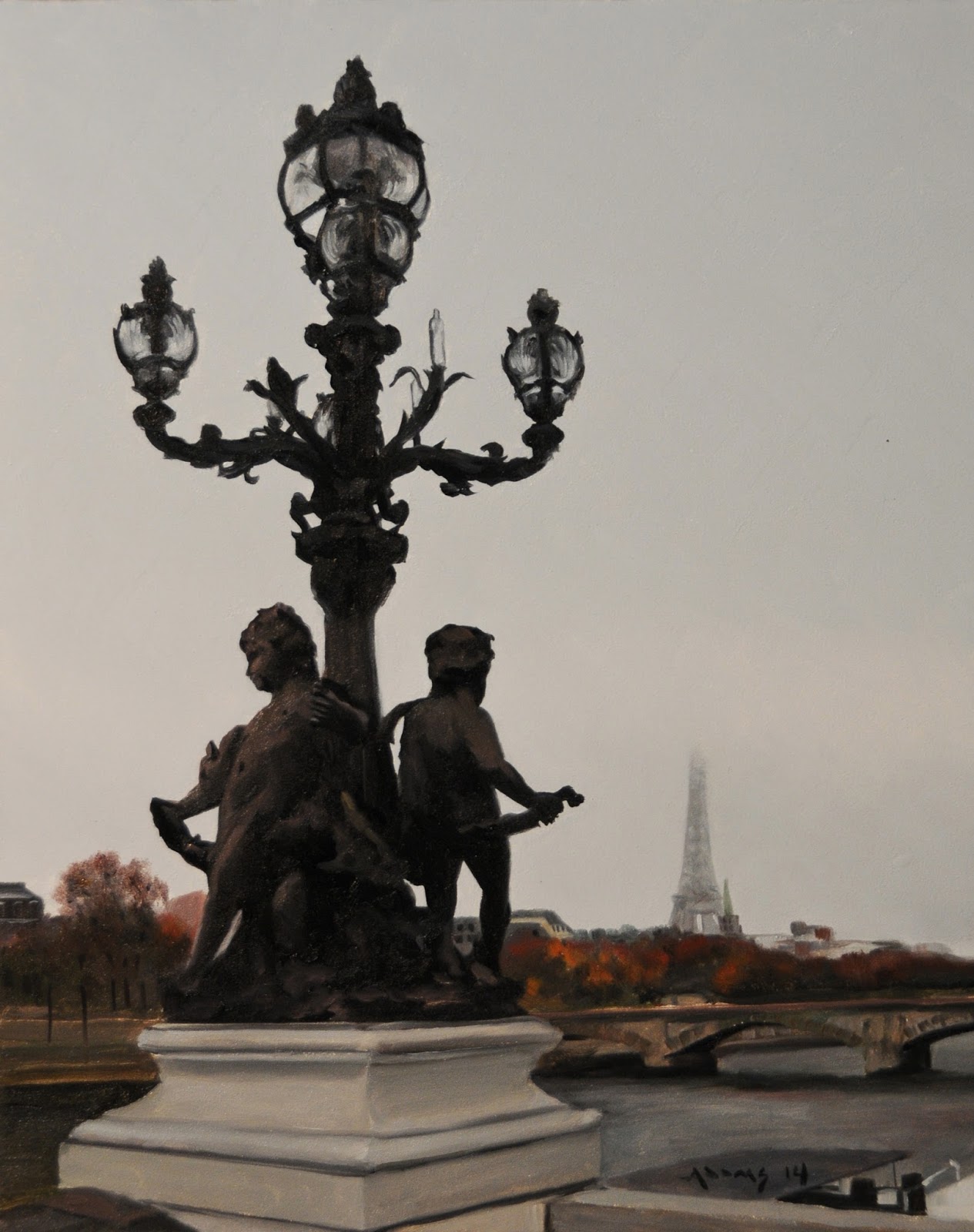 The cupids and sea monsters that festoon this ornamental candelabra were produced by artist, H Gauquic.  There are four of these unique lamp posts located on the Pont Alexandre III bridge in Paris.  It was a particularly foggy autumn afternoon when I stood on the bridge and the Eiffel Tower in the distance was shrouded in mist.
Posted by Mark Adams at 4:48 PM No comments: 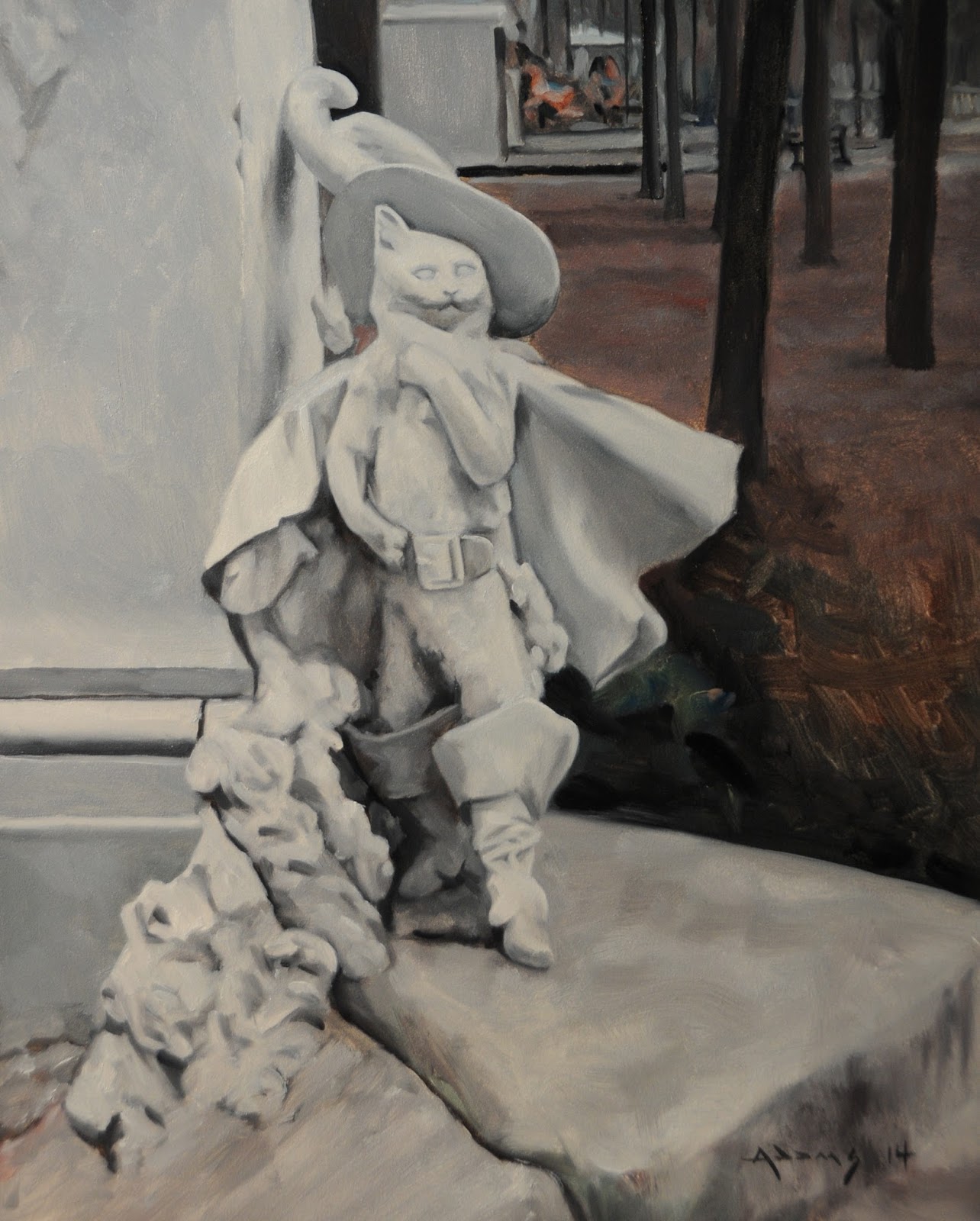 Oil on museum quality ampersand gessobord panel
2014
8" x 10"
Last Wednesday I spent the entire day at the Metropolitan Museum of Art in New York City.  To say that I was invigorated would be an understatement.  Room after room, gallery after gallery of paintings from art history were there before my eyes.  Captivated by the bravado brushwork of artists whose work I thought I knew so well, I brought home to the studio a clear vision and renewed desire to splash around and show the paint like never before.  Today's painting gave me the opportunity to do just that. The subject is a marble figure of Puss in Boots, part of a monument to the author Charles Perrault located in Paris in the Tuileries Gardens. It was late autumn when this reference was taken and the bare ground and sparse greenery allowed for some fun brushwork behind the statue.  I hinted at a small carousel that was in the background for a bit of needed color.
Posted by Mark Adams at 9:48 PM 2 comments:

This is not going to be a hands-on lesson in proper framing technique. The framing of artwork is a highly personal thing.  Some artists like minimal containment and some take a more over-the-top approach.  I fall into the later group.  I am what you might call a frame fetishist.

I have lived in the Baltimore metro area most of my life and I have walked the hollowed halls of the Baltimore Museum of Art often and often.  The Cone collection is a particular favorite of mine.  It is renowned for its early 20th century works by Picasso, Braque, Matisse and their followers.  When then BMA Director Arnold Lehman and Deputy Director Brenda Richardson, who supervised the 1986 renovation of the museum's Cone Wing, decided to jettison the ornately carved gilt frames put on by Gertrude Stein and the Cone sisters in favor of modern strip frames, thinking that "of course the artists surely meant for them to be presented in a more modern simple frame."  The hue and cry was deafening.  I was leading the cheer when in 1999 new director Doreen Bolger returned the paintings to their original  frames which had mercifully been preserved for such an occasion. I Don't think every work of art should be framed to the extreme. Indeed much of my early work is stripped with lattice or simple aluminum but sometimes an overblown big honking frame is called for.

Here is an example of my penchant for the extreme.  We bought this diminutive watercolor by reclusive Smith Island artist Reuben Becker years ago.  The charming little painting is just 4" x 4". 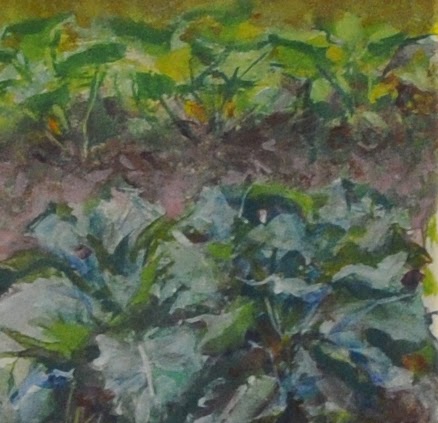 However, after we had our way with it, the painting garnered some respect with it's filigree lined mat and hefty gilt frame. 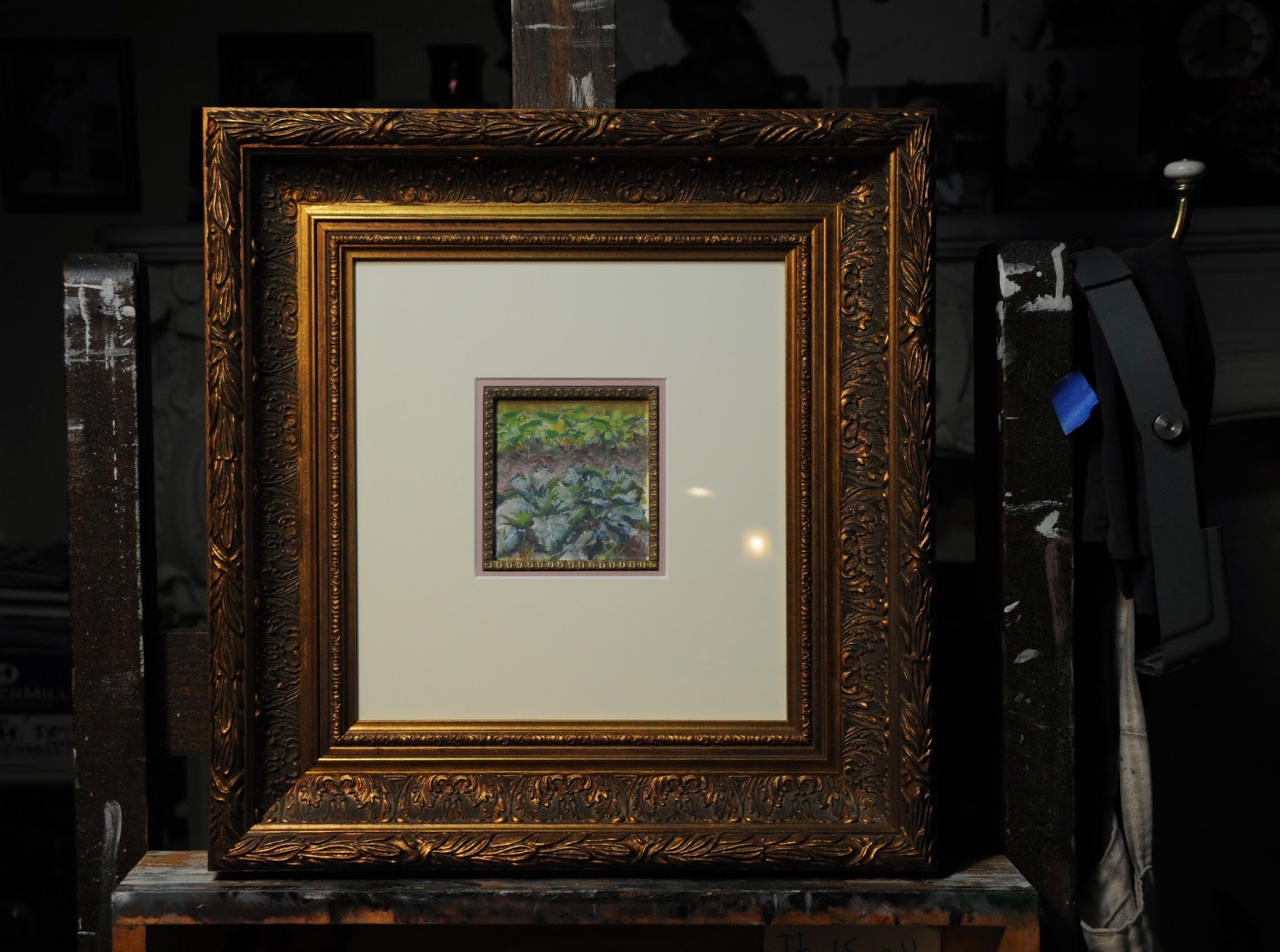 Another example is a piece done by Baltimore artist Steve Waugh. 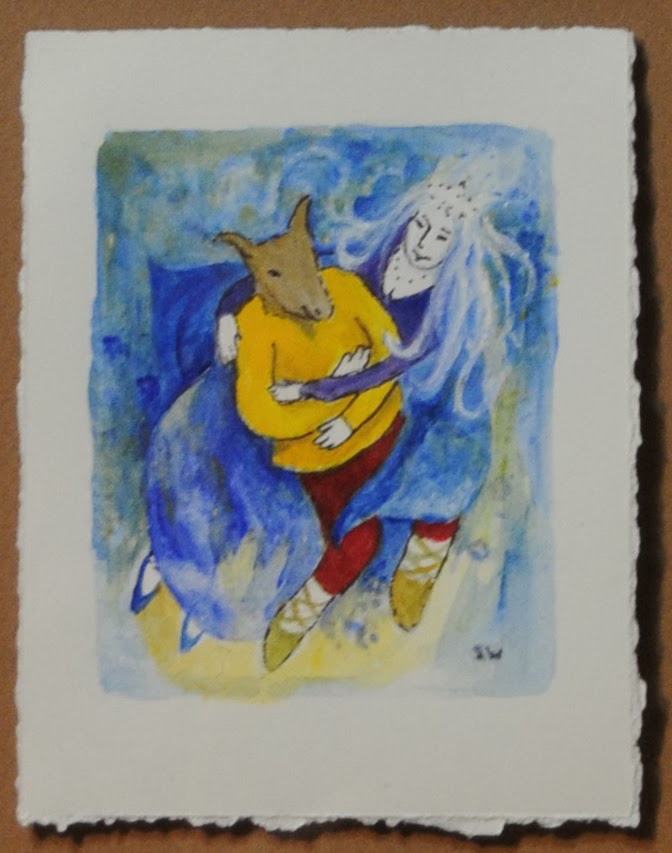 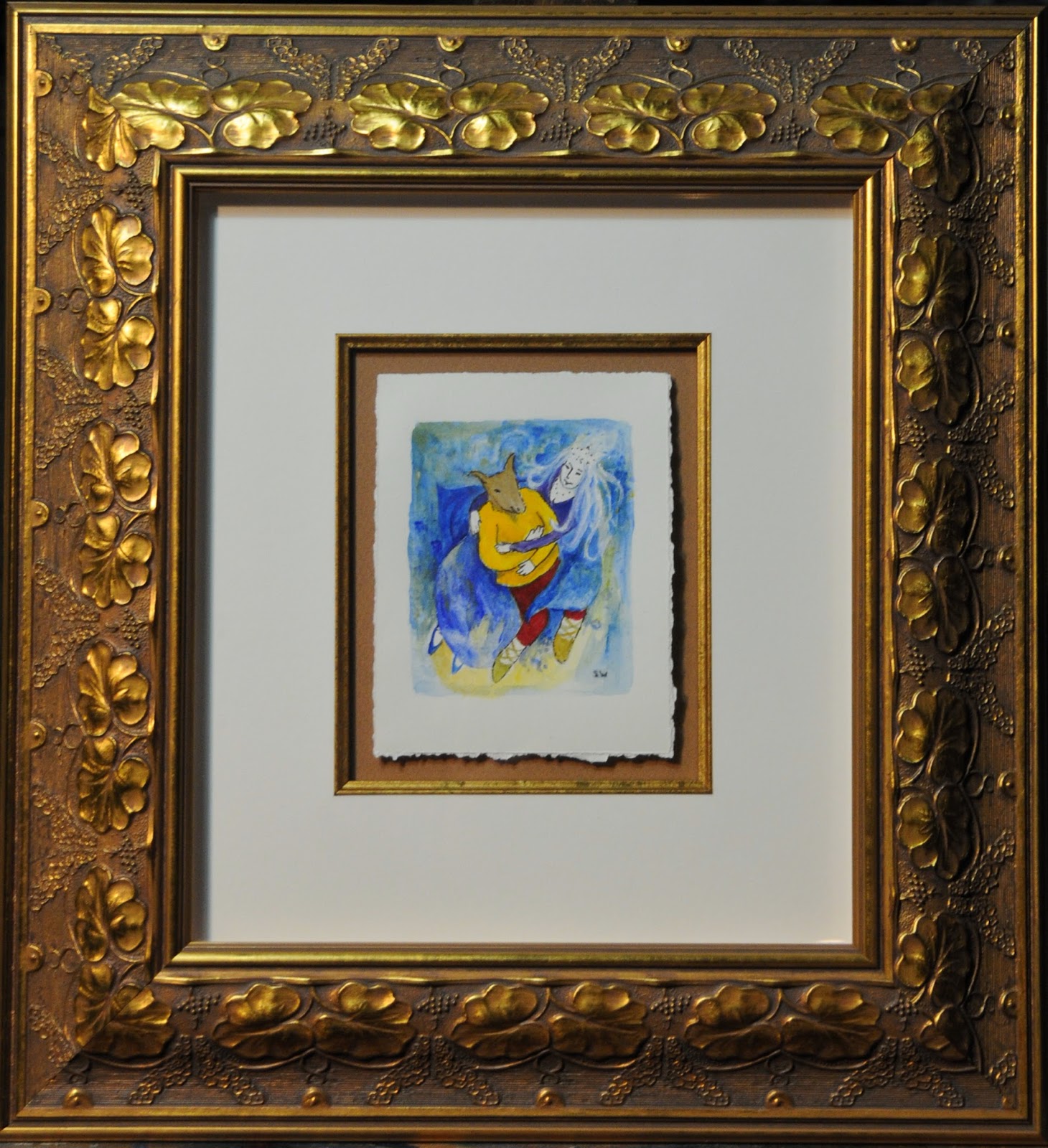 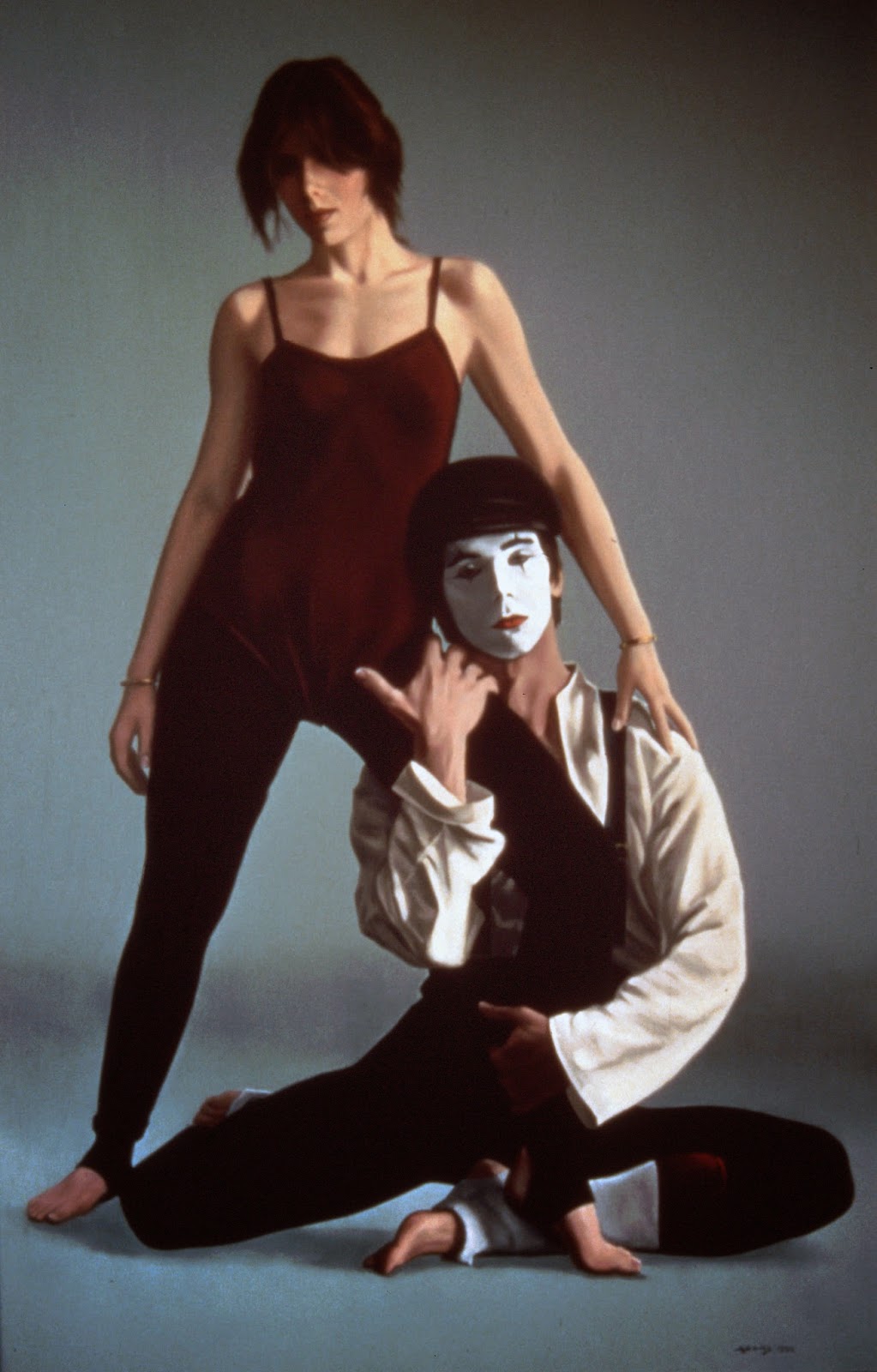 This was painted in the heyday of the mime series back in the early eighties while I was working with movement arts majors Chris Millard and Vince Valenti. In the dance room of what is now Towson University the boys and I were taking a break when in walked a friend of Chris's, a good friend, by the look of it, and they began, er, interacting.  I grabbed my camera as he grabbed her and I got some beautifully composed images in less than five minutes. This stable pose became known as the "Adams triangle," which was oft repeated within my theatre oeuvre.
Posted by Mark Adams at 6:43 PM 2 comments:

Today's Tuesday Tip - "A hole in the wall" 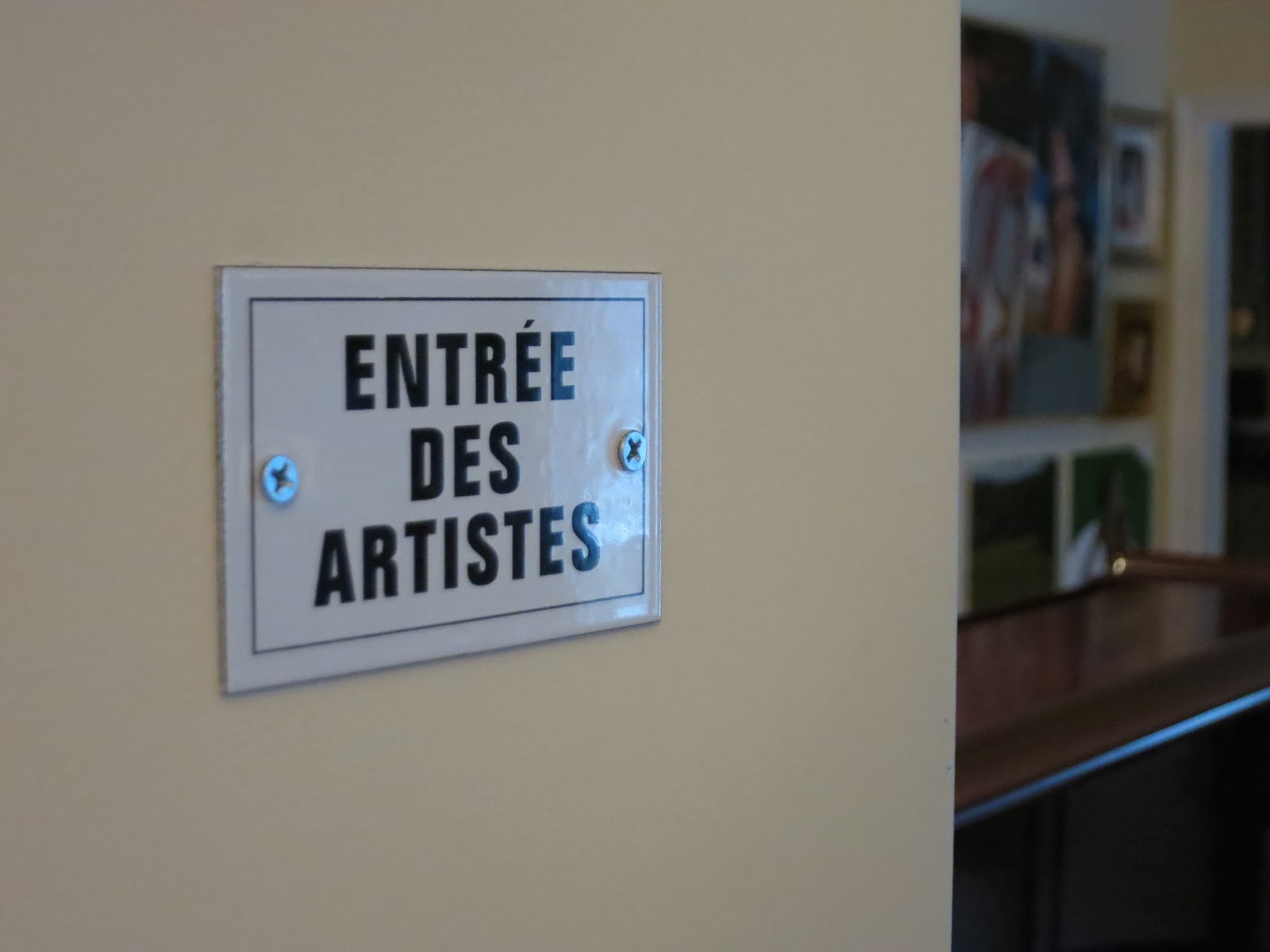 One of my new year's resolutions is to be better about keeping up with my blog(s).  I'm just getting around to this but better late than never.  (I'm also trying to lose weight and exercise and you know how that goes.)  Today's tip is about surrounding yourself with beautiful things and overcoming the fear of putting holes in your wall.  Maybe you don't have that fear at all.  My dad instilled it in me when, as a young budding artist, I wanted to tack drawings up in my room.  "NO, NO, NO!" he shouted.  He said I could use tape but what good is that for paintings?  His solution was to hang a 4' x 8' sheet of Upson board on the wall with molly bolts!   (So much for not putting holes in his precious wall.)  Now I was free to tack up drawings, paintings, invitations and miscellaneous inspirational detritus to my heart's content and I did.  As a grown man I have learned that there is nothing you can do to a wall that can't be undone with Spackle or plaster.  My house is a testament to that.  The Victorians would have been impressed with the sheer volume of art hanging in my house - both mine and others. 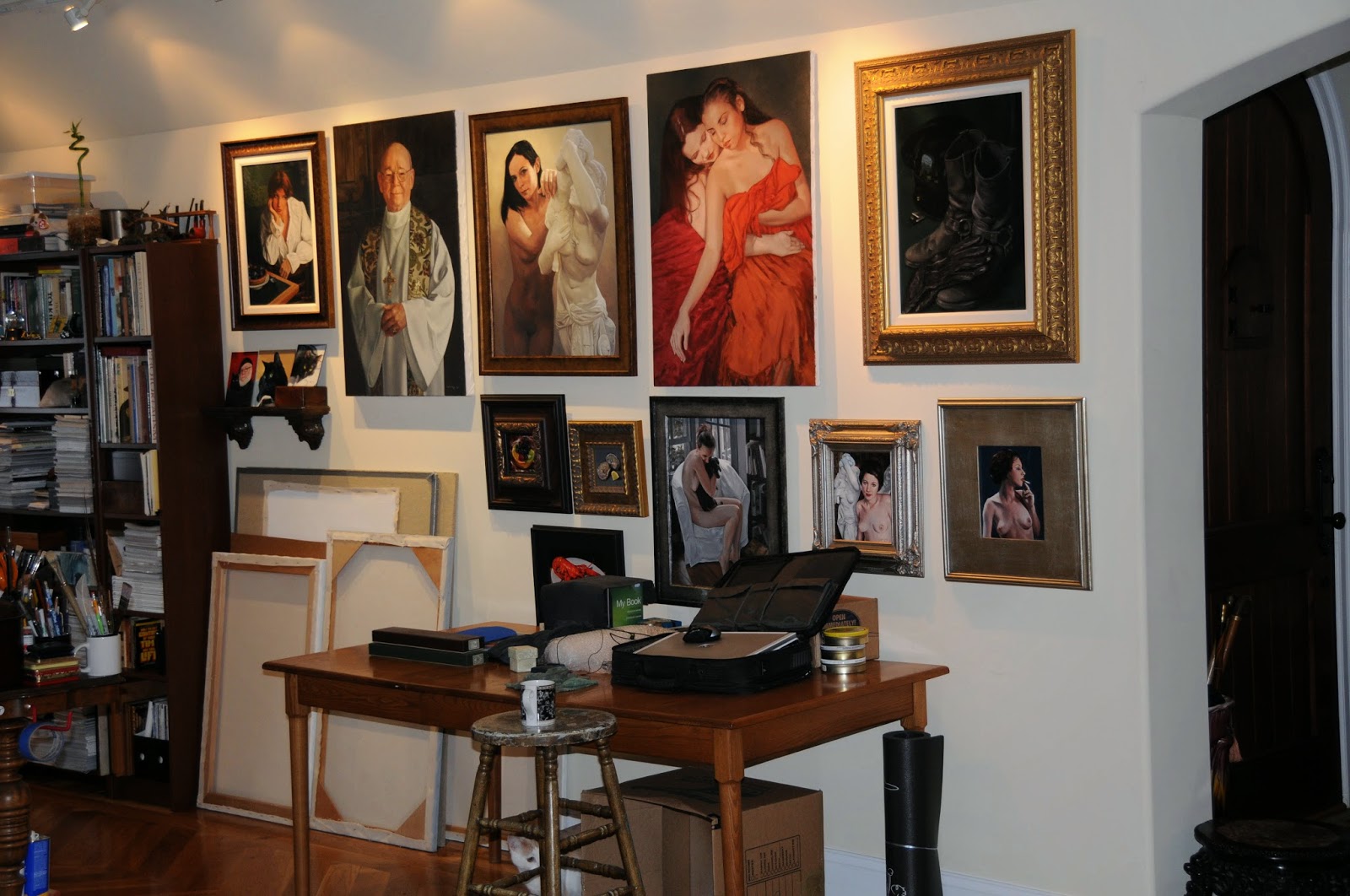 Still, we all have something too precious to mar.  For me it was my mahogany bar.  I have had an antique brass lion plaque stored away for years.  It is gorgeous, weighs 25 lbs and is perfect for the end of my bar in the studio.  You heard that right - I have a bar in my studio.  One that would be the envy of many an Irish Pub, though alas, no Guinness on tap.  The end panel of the bar was beautiful in its simplicity yet was crying out for the lion.  That meant drilling  holes in it to support the weight of the plaque.  Spackle might fix plaster but glossy wood is another story.  I finally screwed myself up (no pun intended) to do it and I am glad I did. 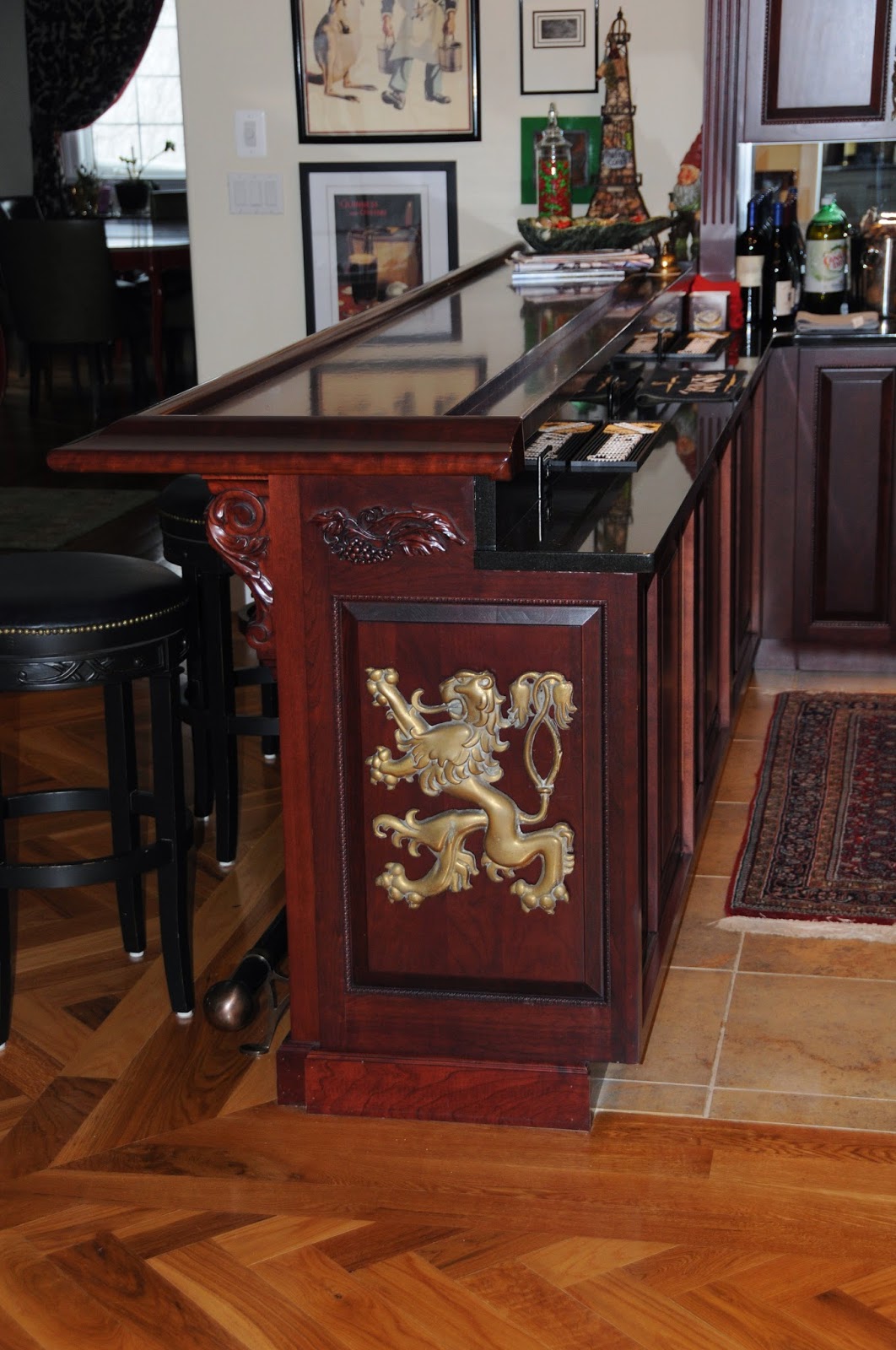 Moral of the story - Just do it!  Hang that art that has been leaning up against the wall, thrown on a shelf or stuck in the basement.  Surround yourself with beautiful things.  You will feel better for it.  The gallery that I worked for years ago had a saying - "One can live as long without art as with it, but not so well."  Words to live by.
Posted by Mark Adams at 4:16 PM 2 comments: 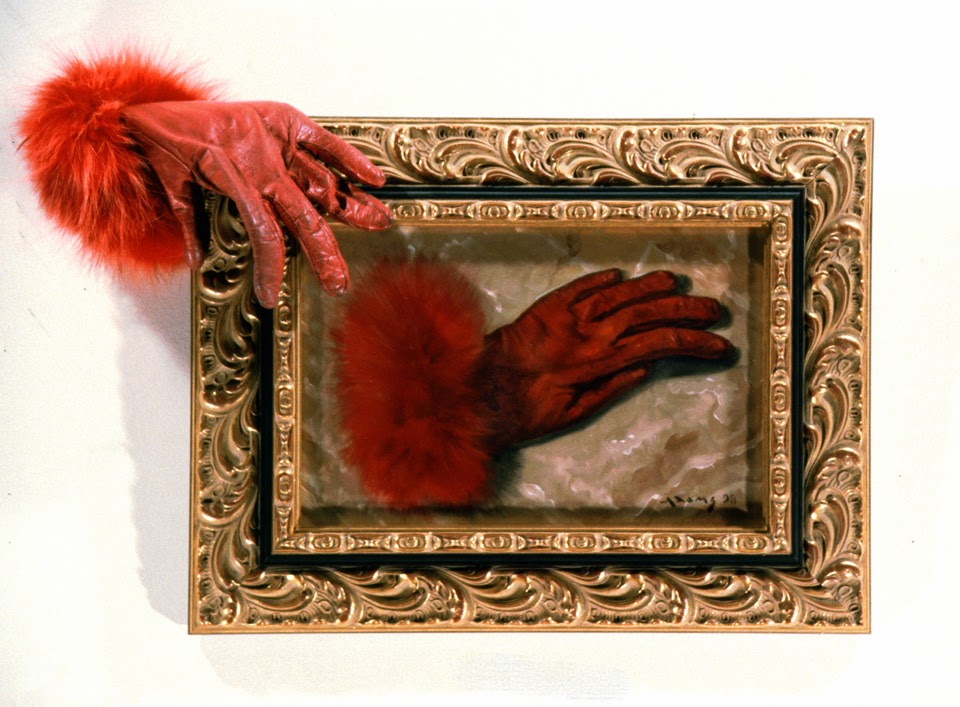 Many years ago, a friend came to dinner and causally threw her coat and gloves on a chair by the door.  Later, when it was time for her to leave, she noticed one of her gloves had gone missing.  The fur and leather glove had proved too tempting to one of the resident Siamese that prowled the studio at the time. Most likely China, the kleptomaniac, who was known to go into purse and pocket, box and bag to find treasures, had whisked it away.  After a futile search, my friend shrugged and tossed the remaining glove to her and her companions and said "Have fun."   I painted the glove as a token of thanks for her generosity but somehow we lost touch. The painting hung for years in the dining room with one glove hanging over the frame, the fickle cats having lost all interest in it.  I think we may have found the glove's mate in a lonely corner of the basement when we moved.