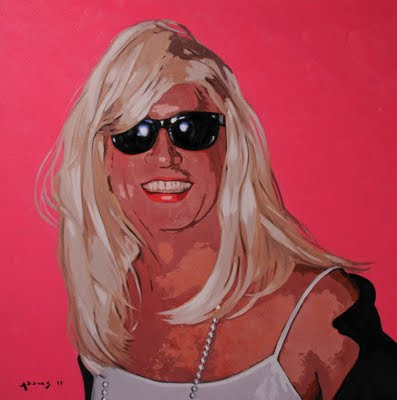 For over 20 years we have had a sit down dinner party to celebrate St. Patrick's Day. The menu is carved in stone: corned beef roasted with sherry, dry mustard and brown sugar, butter-drenched cabbage, beef braised in Guinness, poached salmon with dill cream, Irish soda bread, champ, and Irish whiskey cake. Each year there is a patron saint. Past years have included St. Patrick Stewart, St. Patrick Macnee, St. Patrick Swayze and St. Patrick Henry ("Give me corned beef or give me death") to name a few. When we started running out of Patricks we started adding Pattys; St. Patty Duke, St. Patsy Cline, St. Patty Hearst and, this year, St. Patti Smith (because the night belongs to corned beef lovers). Though not officially a costume party, our guests usually get in the spirit. St. Patsy Cline brought out everyone's urban cowboy, St. Patty Hearst saw everyone in green berets. You get the picture. So we weren't too surprised this year when two of our guests came in drag as Debbie Harry and Tina Turner. We also had a very convincing Patti Smith, complete with copious amount of spirit-gummed crepe arm pit hair and doves on her fingers. OK, you had to be there. I was channeling my inner Andy Warhol when painting this rendition of my friend, Bruce.
Posted by Mark Adams at 7:28 PM 4 comments: 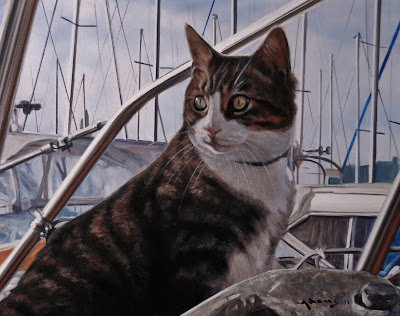 I was recently commissioned to paint this heroic and fantastically fortunate cat - Williwaw. After reading his adventures on the high seas you will agree he is the luckiest of cats

The Story of Williwaw

Nothing short of a miracle describes the survival of Williwaw. Williwaw (Willi) is our tiger cat who has lived with us aboard our 36' sail boat for the past seven years. We (John and Linda) moved aboard our boat in 2001 and spent the first two years cruising the east coast of the States and the Bahamas. It was in 2003 when we crossed the Atlantic that our incredible incident occurred.

On the third night of the passage we were experiencing the typical fatigue from sailing shorthanded. We were on our way from West Palm Beach Florida to Bermuda. The weather was overcast but calm, there was no moon that night and we were motoring along just fine at 5.5 knots in these conditions. With three hours on and three hours off watch we were still adjusting to our off shore schedule. At 3:00 am John was on watch but had dozed off, only to be woken with a timer that we used as insurance to awake us every 10-15 minutes to check the horizon for shipping traffic. John was ready to change watches with me and noticed that Willi was not in the cockpit where he had been sleeping earlier. He called down below to wake me up for my watch and asked if Willi was keeping me company. I got up, still tired from only three hours of sleep and looked around for Willi. It was not unusual for him to find a warm and peaceful place to get a cat nap. With John on deck and me below we searched the entire boat. I was beginning to panic with each minute that went by and no cat to be found. After several more minutes, we decided that he was not on the boat and we didn't know when or how he could have gone in the water.

There is almost no chance of finding anything in the water in the best of daylight conditions when you are out to sea. We were also about 200 miles north of the Bahamas where there is always a possibility of sharks. Without speaking to each other we knew in our hearts that we would not find Willi. I was overwhelmed and on the verge of shock. It was darker than one can imagine; you could put your hand in front of your face and not see it.

In the meantime, John intuitively looked at the compass course and time as we were searching for Willi. John turned the boat around to follow the reciprocal course. We both knew we would not find him but we could at least make an attempt. We motored back about five minutes. Called out, we heard nothing. We motored another five minutes and called. John could hear something very faint in the distance. It could have been anything but most likely his imagination. We went another few minutes in the direction of the soft noise. Called again, we could hear a muffled MEOW. Now frantic to find him before he drowned or was lunch for a shark we continued to start and stop in the direction of his meow.

Earlier that evening during my watch, I had been listening to the short wave radio to try to stay awake. There was a BBC Nature minute about the reflective nature of cats eyes. Now still in my state of panic to find Willi alive I remembered this and got our strongest spotlight. Shinning it in the direction of the noise, we could just barely see one of his eyes in the distance. Now with a better route to head toward, I put the boat in gear and throttled up as fast as it could go. As we first approached our frantic cat, the boat was moving too fast and could not slow the boat down fast enough. As we passed him, I was sure our boat wake would drown him. We made a second attempt to reach him and after failing again, I threw a cushion into the water, it was one of the few things not tied down during our offshore passage. Willi was able to hold onto the cushion making it easier to both see him and eventually retrieve him from the Atlantic.

The next thirty hours exhausted Willi regained his strength and appetite. It was truly a miracle we could find him and see his eyes shining from the light through the darkness in the middle of the Atlantic Ocean.

The remainder of the trip to Bermuda was uneventful for Willi. My mom Joyce met us in Bermuda along with several cat harnesses; we still had over a thousand ocean miles to go offshore before our destination of Portugal.

Since then we have traveled from Barcelona Spain throughout the Mediterranean to France, Italy, Greece, Turkey, Malta, and Tunisia. Then in 2006 we pointed our bow to the north and headed through the canals of France to England and now (December 2008) the Netherlands.

Willi remains our devoted companion. He makes new friends wherever we go; his newest ones are the two fifty pound dogs of the harbor master. His Dutch is improving every day!