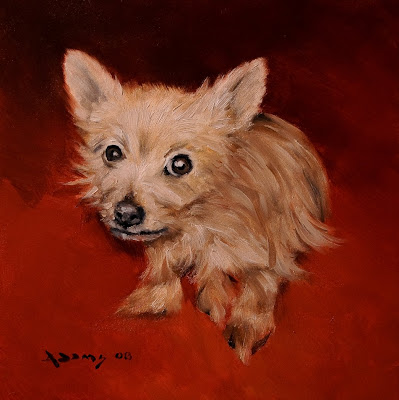 Oil on archival ampersand gessobord panel - 6" x 6"
I know what you are thinking - "So this is it?!  We've waited two weeks for this?!  WTF!!"
When you have been away from the easel as long as I have you want to come back nice and easy so as not to get frustrated.  I have had dear little Elfie in the queue for a very long time.  She may not be Champion O'neill's Elf-girl of Baltimore, but to my friend Deb she is mistress of the house and protector of her domicile.  She may not look like much but you should have seen her before she was rescued.  I have a soft spot for strange looking creatures.  Speaking of which, I am trying to type this with my 18 years old Siamese Anna on my lap.  She has had a very tough week.  An abscess sent her to the veterinarian last week and she had to have some serious surgery to remove a large patch of dead tissue - no small feat for an old cat.  Both front paws have been shaved for the IV's and half her hind quarters.  On top of that she has on an Elizabethan collar to prevent her from biting the 5" of stitches - making her look like a lamp.  She is very unhappy and embarrassed but doing well.  JJ went lame in mid May and was misdiagnosed with a torn ligament.  It turns out that it is some sort of neurological problem.  He is walking around the studio like Quasimoto and we still don't know the answer.  That is why I haven't had the heart to paint.  That and I have had the tooth ache from hell, the antibiotics for which have knocked me out.  The tooth comes out on Friday - yippee.  Though the composition was simple, I had fun with the brushwork on this painting.  I have something more intricate planned for tomorrow - no, really.
Posted by Mark Adams at 5:01 PM

Call me a sentimental softie, but I really like this whimsical pet portrait. And the humorous title made me grin.

I'm so sorry to hear about your poor pets' troubles. Those who mean much to us make our world go round and when something's wrong, life for us just kind of stands still.

I just got off the phone with JJ's veterinarian. It turns out he has a myriad of problems contributing to his current problem. We'll get through this together. We always do.

I was looking over past comments and came across one that you wrote on "Leo" that I missed. It is very apropos to my current malaise. Thanks. It is good to know I am not alone in these feelings of artistic uncertainty.

I am painting strong today.