"Three on the half shell"

Here it is kids - the last painting until I return from Paris early next month. Rest assured that I will return fully charged to get back to the easel. What better place to become inspired than the City of Lights? À bientôt. 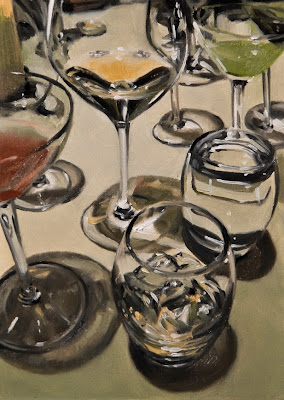 We celebrated my friend's birthday this past weekend at an elegant restaurant in Baltimore. The collection of preprandial apéritifs made an interesting composition. I particularly like the traffic light created by the Cosmopolitan, white wine and appletini. Please don’t brand me a Philistine for drinking my Laphroaig "on the rocks", ice is fun to paint. Hey, how did that water glass get in there?

For the last 3 months I have embarked on an artistic journey of daily painting which has opened my eyes to a world which I thought was lost to me. Is there anything sadder than an artist who has lost his spark, his inspiration, that thing that drove him to create? After 40 years, I despaired that my muse was gone for good. I read all the self-help books on regaining your creative vision, studied the “Artist’s Way”, did my morning pages, etc., but nothing ignited the flame. I knew I could still paint and buoyed myself up by painting portraits, not that there is anything wrong with that, per se. But portraits are meant to please the sitter and the artist together. I wanted to paint for me and have others excited by my vision. Portraits, even good portraits are done one at a time. They move through the studio one or two at a time. Years have gone by since my last one man show. Friends stop asking what I was working on. Then one day while I was researching a painting on the internet, I stumbled upon “dailypainters.com.” I was transfixed by the variety of artists doing on a daily basis, what seemed impossible; to take mundane, everyday objects and compose them into little jewels. Art didn’t have to have an earth shaking message. It needn’t be this deep thing. It was enough to be well composed and executed. I loved that the hand of the artist, those mad brush strokes that no computer software program could create, were there for all to see. The clouds parted and I too, started seeing in paint again. The paintings in my last exhibition were all 40” x 60” and here I was doing these little tiny works and becoming more excited about them by the day. Friends dropped by the studio and were excited again. I started posting them on a blog and people would be upset if a day went by without a new piece. I hadn’t even figured out the ebay thing and yet most have been bought in what could be described as a feeding frenzy…”What do you mean the fish are gone?” Today I got word that I had been juried into that group of artists that had reignited my passion for this crazy artist’s life – http://www.dailypainters.com/. Of course, as fate would have it, I leave for Paris this weekend and will be disappointing those who like my stuff. Rest assured, it is only for a week and I hope to gather a lot of fresh ideas while there.
I have this thing for corks, as many of you know. These champagne corks reminded me of a pile of mushrooms. I thought it would be fun to inject a bit of color and shine with the medallions. Enjoy.

The dilemma of the artist’s wife 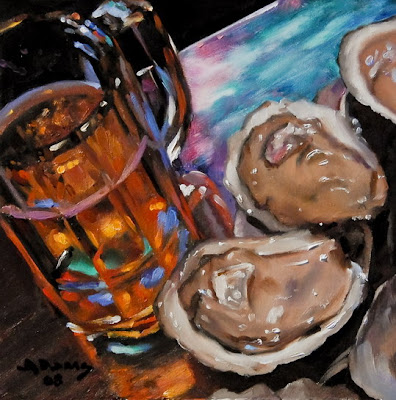 My wife is often placed in the precarious position of being my second set of eyes. Having spent hours working on a piece, one tends to lose objectivity and the dreaded “Well, what do you think?” is tentatively posed. As she stands there with furrowed brow, I can see she is weighing her options. There is something in the painting that bothers her. Should she say something and risk bruising the delicate artistic ego or say nothing and keep the peace? I usually can tell when there’s something bothering her. “What?” I ask. “You’re not going to leave it like that?” she says, pointing to that one stroke that invariably is my favorite little flourish. It’s a no win situation for her.
Yesterday was a case in point: “Well?” I asked. “Gee, I don’t know about that copper bar. I’m not getting the feeling of copper; it looks like a seascape to me.” Uh oh! She just placed a squirrel in my painting. Wait, what?
During the early days of the cubist movement, Picasso and Braque were great friends and would often critique each other’s work. I imagine their conversation went something like this: “Puits?” “Il est grand excepté l'écureuil.” “Écureuil, quel écureuil?” “Là à côté de la guitare.” “Merde!” (Picasso: “Well?” Braque: “It’s great except for the squirrel.” Picasso: “Squirrel, what squirrel?” Braque: “There, next to the guitar.” Picasso: "Shit!”) Not unlike a Rorschach inkblot, once an idea like that is planted in your head, nothing can get it out. The notion of the seascape was so strong I had to go back in and pick at it until it was gone. Happy accidents happen all the time in this journey we take as artists and this morning I had one of them. Determined to get rid of the squirrel (waves crashing on a not so copper shore) I wiped out the offending blobs of white which I had laid on with a small palette knife the day before. The crimson and cerulean hues had set overnight and had stained the panel. The effect was exactly what I (and Susan) was looking for. Had I rubbed it down last evening it would not have worked, but as it turned out, we had dinner plans that took me away from the studio. Oh, another lesson: Never, ever “pick” after you have been drinking. We’ve all been there: You’ve been out with friends, shared a few laughs, had a few pints, and later you walk into your studio to look at the day’s work. “Hmmm, that one stroke looks odd.” (My words, not hers.) I’ll just fix that. Oops! No problem, I’ll just fix that. Oops! and so on. …Don’t do it!!

"A mug of beer at Mike Anderson's" 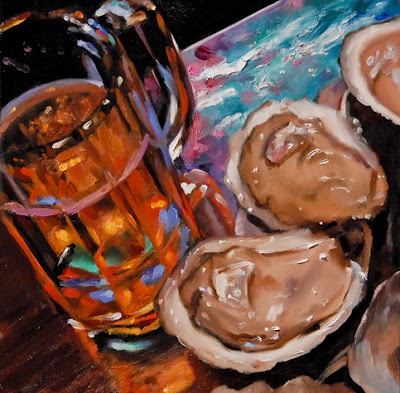 When you get in an artistic funk, sometimes you just have to go with what inspires you the most. I’ve been saving this image for just such an occasion. The reflections of neon off this wonderful copper-topped bar at the now dark Mike Anderson’s was crazy good fun to paint. The mug of beer is a carnival of color. It's been said "a painting is never finished – only stopped"…I’ve stopped here. Knowing when to stop separates the good artist from the great. The lesson for the day - don’t pick. (I know tomorrow I’m going to pick at this painting anyway. I always do.)
Posted by Mark Adams at 6:17 PM 1 comment: 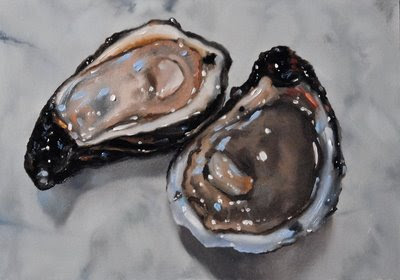 Oil on archival, museum quality, 1/8” Ampersand Gessobord™ panel - 5" x 7"
How’s this for an excuse for not painting this week – I lost my glasses. Last week was particularly warm and I took the opportunity to get in the wind on my Harley. I changed into my sunglasses and stuck my prescription glasses in my leather jacket. Sometime during the ride they fell out and got run over. I found them two days later crushed by the side of the road. I have a spare pair but they are not good for painting. Yesterday I went to the ophthalmologist to get a new prescription and he put drops in my eyes – Whoa…cool colors, but not great for painting. Oh, I was in Florida from Thursday until Sunday so no work on those days (although I did glean some reference material during the trip.) Today’s painting was done wearing my old, old spare pair.
These oysters were shucked especially for me to paint by “Stormin” Norman at the Acme Oyster House in New Orleans. They look good against the white marble oyster bar.
Posted by Mark Adams at 5:15 PM 5 comments: 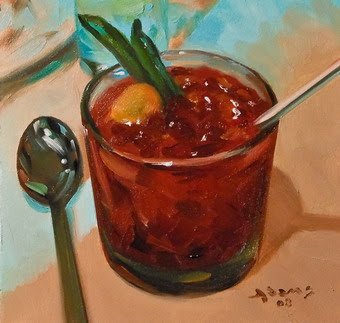 Oil on archival, museum quality, 1/8” Ampersand Gessobord™ panel - 5" x 5"
Some say the Sazerac, a drink made with rye whiskey and Peychaud’s bitters is the quintessential New Orleans cocktail but for me it is the Bloody Mary. Every restaurant tries to give it their own twist (no pun intended), but one element that is constant and unique to the Big Easy is the inclusion of spiced beans. I always have a jar on hand and wouldn’t think of jamming a big old hunk of celery into one of my morning cocktails. This particular Bloody Mary was had this past December at Herbsaint. I tried to have some fun with the color and paint. Do you know what it means to miss New Orleans? I sure do!
Posted by Mark Adams at 11:41 PM 1 comment: 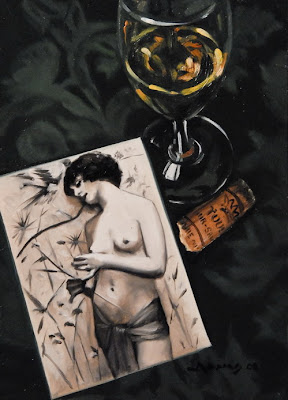 I like the innocence of this old french postcard. Painting it reminded me of the fashion paintings, albeit on a much smaller scale. À votre santé!
Posted by Mark Adams at 11:55 PM 2 comments: 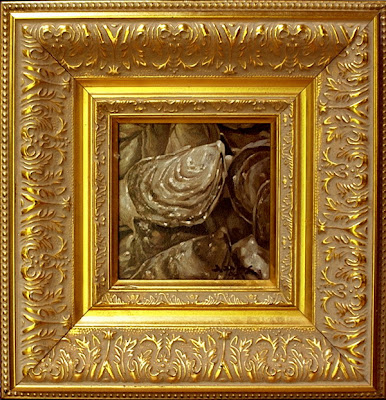 Today I went on a field trip to the Philadelphia Museum of Art to see the work of Antonio Mancini, the late 19th century Italian realist. If you don't know his work, you owe it to yourself to check him out. His early work, including a piece he did at age 16(!) was spectacular! He got a bit crazy later in life, but then don't we all?
Yesterday's painting presented me with a new challenge: making a cluster of unopened oysters visually interesting. The daily paintings have hitherto been ala prima - direct paint with no glazing or scumbling. Painting the outer beauty of the oyster requires the richness and depth that only glazing and scumbling can give. Watch for the Cape May Salts to deepen in a week or two. I give you as an example "moonstones" - which benefited from a similar treatment.
Posted by Mark Adams at 8:38 PM No comments: 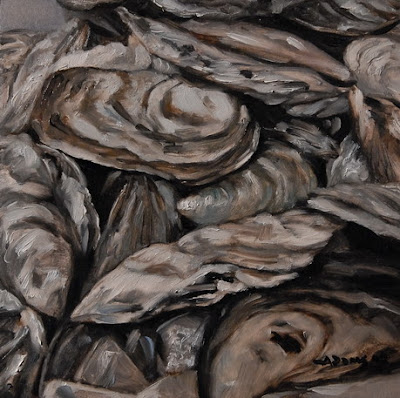 At the risk is becoming known as "the guy who paints the oysters" - here is another oyster piece. I don't think I will ever tire of painting these creatures. They are as different as snowflakes and the variety of color and texture keeps drawing me back. Not to mention that I get to eat them when I'm done. Quite a bonus since they are delicious. 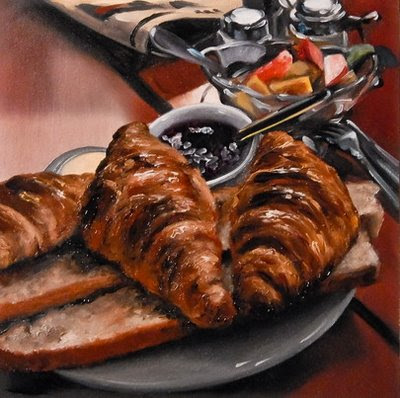 Oil on archival, museum quality, 1/8” Ampersand Gessobord™ panel - 6" x 6"
O.K. campers, here is the first little painting of the new year. I am going to Paris at the end of the month and this plate of croissants and bread is a small reminder of my last sojourn across the big pond.