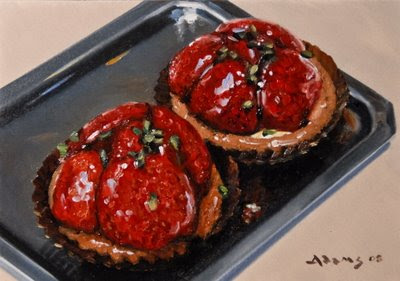 oil on archival, museum quality 1/8" ampersand gessobord panel - 5" x 7"
What can I say about strawberries? When I was a boy, my dad took me sailing every Sunday, whether I wanted to go or not (I didn’t). He longed for me to share his passion for being “in the wind;" I never did, although being “in the wind" on a motorcycle has been my passion for 40 years. When I was old enough to drink, preferably beer, sailing became way more tolerable. Dad kept a bottle of Chivas Regal on the boat which, I later found out, contained Four Roses that he had decanted into the empty Chivas bottle after he had finished it. That was my Dad. On the high seas, you drink what’s available...any port (or scotch) in the storm. For years I thought Chivas was swill until he sheepishly confessed. Dad, an old navy man, was ahead of his time. Long before the gas wars of the 70’s, when the price of gas on the dock skyrocketed, propelling all those Chris-craft owners to take up the sheets, Dad had his little wooden Spanish sailboat; the Señorita, moored at Stacy’s Salvage Yard. It was the only sailboat in the place. Later Stacy’s would grow to become the Trade Winds Marina, a huge sailboat facility, but back then it was little more than a marine junkyard. The bright spot of going sailing on Sundays was the prospect of getting a 25 cent hamburger at Gino’s or, in season, going to the farm near the boatyard and picking strawberries. There was a “pick your own” field on the road near the docks and this was my introduction to real fresh produce. The prospect of fresh strawberries and corn on the cob in late summer made those Sunday sails bearable. I grew up, as did most of us in the 50’s, with canned vegetables. I didn’t see fresh spinach, peas, asparagus or mushrooms (which I never saw, period) until I left home. I can tell you canned asparagus is nasty and don’t get me started on succotash. Who came up with that one? Why ruin perfectly good corn, even canned corn, by adding lima beans…yuck! Those ripe fresh berries made for some tasty strawberry shortcake!
Posted by Mark Adams at 11:37 PM

The glaze on those berries just shimmers away!

Thanks Diane. “Even the coeur flottant merveilleux aux fraises, presented with a great flourish, made little impression, for it was no more than what may happen to the simple, honest dish of strawberries and cream once it falls into the hands of a Frenchman.”
Dr. Watson in 'Sherlock Holmes and the Hapsburg Tiara'